Plot:
David (Björn Kjellman) is the leader of the conservative party. He’s recently had some losses and he feels generally frustrated, though he’s pushed on by his wife and advisor Fia (Tova Magnusson-Norling). As if that wasn’t enough, David falls in love with Martin (Eric Ericson), even though David is married, Martin is a man, but worst of all – Martin is a social-democrat and his political rival. But despite all of that, the two of them just can’t stay away from each other.

Four More Years was an entertaining film. It was funny and warm-hearted and despite a couple of blunders (and a moment of completely unnecessary bi-bashing), it makes the time pass quickly. 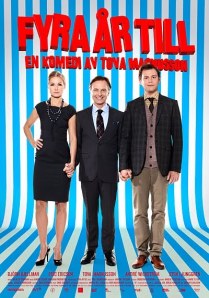 I have to admit that I was pretty confused in the beginning of the film. I don’t really know my way around Swedish politics and as they rapidly traced the rise and fall of David’s party, I got that it was rising and falling, but I didn’t really understand why. But it wasn’t really necessary anyway to know that for the understanding of the story (though it was worth for Björn Kjellman’s face when David finds out that he’s lost).

What was actually important was that I liked the characters and the movie’s sense of humor. There are some very funny jokes and even slapstick moments that work. Unfortunately there is also one moment where David tells Martin that he’s bi, which Martin laughs off, basically saying that bisexuals don’t exist and from that point on, David is gay and bisexuality is never mentioned again and that was just ugh… don’t deny sexual orientations, people, really. 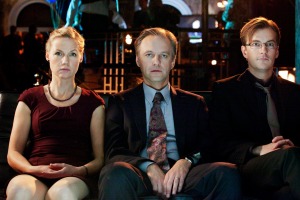 Overall the movie is told with a lot of warmth, though, and it is well-paced. The script wasn’t perfect – the way Martin and David keep meeting and breaking up and meeting again it all felt a little too convenient, for example – but I didn’t mind that.

Despite being pretty predictable and having the most kitschy ending, and despite the a little overwhelming presence of a Swedish band that I didn’t care much for, I really enjoyed the movie to the last.