Plot:
Daniel (Jesse Eisenberg), Merritt (Woody Harrelson), Henley (Isla Fisher) and Jack (Dave Franco) are talented magicians who get a mysterious invitation including instructions to form a magic troupe and pull off certain acts. Among those acts is a bank heist that skeptic Detective Dylan Rhodes (Mark Ruffalo) and Interpol agent Alma Dray (Mélanie Laurent) have to investigate. But things are getting weirder and weirder.

Now You See Me is not a particularly smart or mind-blowing film, even though it tries very hard to be. But it is a movie that is fun and entertaining.

The thing that worked best about Now You See Me are the magic shows themselves. Of course you know that there is no actual magic and that there is trickery involved and yet the shows and tricks are so awesome, so wonderful that you just don’t care. You can’t help but sit there with your chin hanging around your navel and with an urge to clap from delight.

There is much that I can excuse for a movie that manages to make me feel like that. Like the strenuous plot twist towards the end, that was at the same time ridiculous and foreseeable. Or the absolute lack of necessity of Alma and the romantic story there. 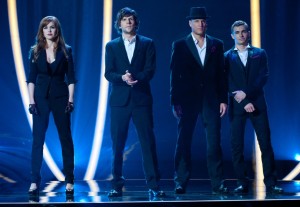 The cast was excellent, though none of the characters were an actual stretch for any of them. In fact, the movie never really left its comfort zone. But it wasn’t actually necessary to do that to make it entertaining.

For that it was enough that it was well-paced, fun story with some very nice visuals. And it had plenty of that. 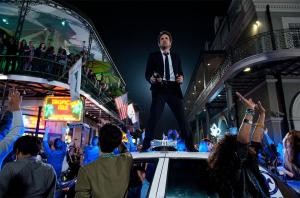