Plot:
In the future huge monsters – kaijus – have started to rise from the sea. To defend themselves humanity has developed huge robots – jaegers – that have to be piloted by two people at the same time, for which they need a certain neurological compatibility. One of these pilots is Raleigh (Charlie Hunnam), who lost his co-pilot and brother and has since retired. But he gets re-recruited by Stacker Pentecost (Idris Elba) who plans a last ditch effort to keep the monsters at bay before the jaeger program is disbanded.

I was disappointed by Pacific Rim. With all the positive reviews and buzz the movie gathered (and Guillermo del Toro at the helm), I’m afraid that my expectations were just way too high. 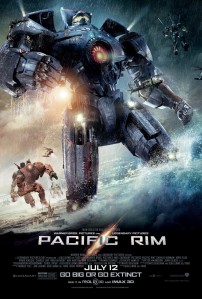 Here are the things I did like about the film. I loved Mako (Rinko Kinkuchi), especially in the beginning, when it was mostly about her relationship with Pentecost [unfortunately the whole thing starts to break down a little towards the end – see also this analysis]. Idris Elba was great. I enjoyed Gottlieb (Burn Gorman) and Newton (Charlie Day). I loved that the way Max Martini pronounced his character’s name – Hercules Hansen – it sounded like Hercules Handsome, which basically perfect. Ron Perlman was perfect, too.

And I liked the idea of drifting and needing two people to operate one thing and that they needed to be in tune (reminded me of Embassytown). But honestly it didn’t make a whole lot of sense. One of the first things they say is that it needs shared memories to really work (Raleigh and his brother), but then it also needs a neurological connection (Raleigh and Mako) and then it just needs the plugs because obviously Newton has no problem connecting with the kaiju. A little more consistency would have been good.

The CGI and the action was pretty cool, but I have to admit that when the film entered his second hour, I had seen enough robots fight monsters. I just couldn’t get that excited about it. If there had been a little more substance and a little less fighting, I might have not been so bored by the end.

And it was absolutely irritating that the jaeger pilots were such walking clichés. The Russians were basically a meta-study of every Russian movie gangster ever. The Chinese are so little individual that they manage to drift in threes, instead of twos. Because we all know that they are all the same, amirite? And that the two actual protagonists in such an international world were, of course, two white dudes. And not only that, two white dudes who looks so much alike – Charlie Hunnam and Robert Kazinsky – that when Kazinsky first showed up, I was completely irritated how Raleigh could be in two places at once.

There was just too much that didn’t work for me that I could really like the film.

Summarizing: If the idea of a CGI-robots-monsters-fight-fest excites you, go for it by all means.