The Monuments Men was the cinematic equivalent of “painting by numbers”. The end result isn’t that bad but it certainly isn’t something you’d call art. They took the standard ingredients and mixed them in the standardized way and the result is, well, it’s there. It’s rather unoffensive. But it’s just too bland to do much with.

So you have your standard Nazis, practically cartoonish in their evil (Hitler in the shadow with the model of his museum was so ridiculous I actually laughed about it). You also have the standard Russians who might have been on the right side of the war but only by coincidence and only for their own gain. And you have the morally upstanding, wonderful Americans [who are so honorable in everything it makes you sick] who make everything right int he world, with a little support by the French and the British. But not too much! Of course there’s also one poor German-Jewish kid who had to flee to America and now fights against the Nazis himself. MURRICA! [That they apparently couldn’t find even one German native speaker for the role is very sad.] 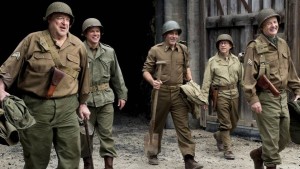 There were some jokes that actually worked, mostly because you could give Bill Murray a math exam and he would make it funny, especially in combination with Bob Balaban. But most of the time the script was just weak and not helped at all by the direction or the camera work which were so completely obvious that you know what was going to happen just from the way things were set in scene. But honestly a script that has several monologues about its own message, plus an epilogue in case you still don’t know what it was about, couldn’t have been saved even by the best director. Even Desplat’s soundtrack was disappointing.

There was potential there, especially with that cast. The story could have been made into something. But it would have needed a more differentiating approach than what Clooney and Heslov offer here.