Plot:
Bill Marks (Liam Neeson) is an air marshal with a host of problems, not the least of which is that he drinks too much. But all of those things take a back seat, when Bill starts receiving text messages mid-air threatening the plane and to kill its passengers if they don’t receive a whole lot of money. And despite Bill’s vigilance and the fact that the plane is flying, people start dying.

Non-Stop suffers from many things but mostly from a plot that doesn’t make a lick of sense and some serious lengths in the second half. At least there is the wonderful female cast. 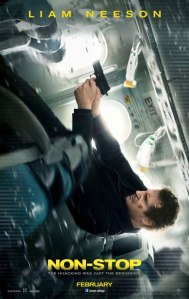 I don’t know what’s happening with Liam Neeson, but I kinda want the dude back who made Michael Collins instead of the dude who makes one mindless action flick after the other, most – if not all – xenophobic and ultra conservative. This one isn’t so bad. But it isn’t any good, either.

The film is supposed to be a locked room mystery at 1000 m up in the air. Which sounds completely awesome. Unfortunately the plot is so incredibly dumb, it made me want to cry. It depends completely on coincidences that had to be part of the plan or nothing would have worked and that’s just… people. It don’t work that way.

But why would I expect an intelligent plot in an action film, I hear you ask. Well, maybe I shouldn’t. But even not considering the plot, it’s a film that has Julianne Moore, Lupita Nyong’o and Michelle Dockery and I still couldn’t wait for it to end because I was so bored.

Plus, Bill Marks is an incredibly problematic man to make a hero. If the film had been more thoughtful or complex, they might have pulled it off. But it was neither and as such, it left me with a bitter taste in my mouth.