Plot:
Ivan Locke (Tom Hardy) is a construction manager and loving father who prides himself in being absolutely reliable. Nevertheless he gets into his car after he receives a call one night and drives away from the biggest challenge his company ever faced and from his family.

Locke is an amazing film that proves once again how little you actually need to tell a compelling story. Despite the fact that all you see is Tom Hardy driving, I was glued to the screen for the entire time. 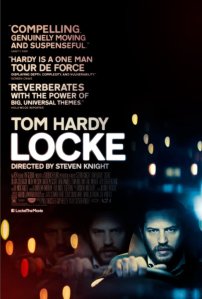 Locke was the closing film for the Viennale last year and since opening and closing films of the Viennale usually get a wider release in Austria anyway, I decided to skip it then and rather watch Upstream Color. And then Upstream Color sucked and Locke didn’t get a release date and didn’t get a release date. I had given up hope when I suddenly saw a trailer for it in a regular cinema. In June. That is all to say that my expectations for the film were high to begin with and the wait that lasted about forever only heightened them. And I was still blown away by it.

I mean, first of all, there is Tom Hardy’s amazing performance. As I said, he is the only actor on screen, the rest of the (frankly astonishing) cast just supplying voices. And there is never any question whether it might get boring or that he might lose the audience at some point. Instead it’s hypnotizing to watch him. You can’t look away and you wouldn’t want to anyway. 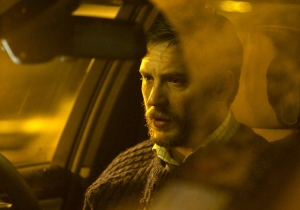 And all of that without anybody to bounce things off of and in such a tight environment where his space isn’t only limited by the fact that he is in a car, but also that he is driving. That practically only leaves  his face and his voice to work with – and apparently you don’t actually need anything else to give an amazing performance.

But while Hardy’s performance is at the heart of the film, it’s not the only thing that is excellent. The camerawork was beautifully done, again, no easy feat in such a setting. But it uses the street lights, the reflections and the little space in the car very much to its advantage. Steven Knight wrote a fantastic script with a great main character and an interesting conflict that he tells with a good sense of pacing. I loved it.

Summarizing: One of the best films of the year so far.