Plot:
Maria (Natalie Wood) has recently come to New York from Puerto Rico to stay with her brother Bernardo (George Chakiris) who has already built his life in the city. Nardo’s life also involves leading a street gang – the Sharks who are the big enemy of the Jets, now led by Riff (Russ Tamblyn), after their former leader Tony (Richard Beymer) quit for a more trouble-free life. But then Maria and Tony meet at a dance and fall for each other immediately. But will their love be enough to bridge the rivalry?

I watched parts of West Side Story way back in school and basically all I could remember about it was the snapping fingers. But of course there is a whole lot more to the film and I’m glad I got to appreciate it in its entirety and even on a big screen. 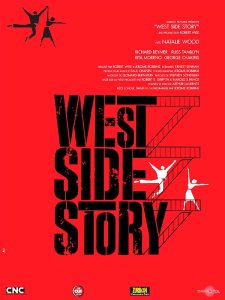 There are several things about the film that seem a little ridiculous if you look at it over 50 years later. There is a naivité about it which was probably a product of its time, but which seems especially and overly sweet (even at its darkest momets) to today’s audience that is used to explicit and unrelenting violence.

Though it is particularly Natalie Wood and Richard Beymer who are too smooth in their roles so that the tragedy never really hits that close to home. [Quite to the contrary with Anita (Rita Moreno) and Nardo who arguably don’t go through the same level of dramatic events. But both Moreno and Chakiris explode with passion in their roles and every moment they’re on screen drags you through at least 10 emotions.] 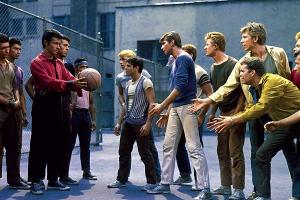 Another thing that might seem too much, too constructed, but actually works for me is the use of colors. The gangs all get their color schemes, the sets are drenched in those colors and generally you get to see huge blocks of a single color all the time that gives the movie a very distinct aesthetic and feel.

And I remember how long we made fun of the finger snapping in school, but honestly that scene was great. As was the dancing in general which was expressive and somehow even bigger than the film. The music was wonderful, too. I didn’t know it was Sondheim who wrote the lyrics, but listening to them you can actually hear it in their beautiful rhetoric that fits both the film’s light moments and its depths.

Summarizing: If you love musicals, this is a must-see, despite its flaws.