Plot:
Marieme (Karidja Touré) lives in a poor area of Paris, heading towards a dead end in school, strictly supervised by her brother while charged with taking care of her younger sisters while their mother works. Everywhere boys seem to rule the world – until Marieme meets Lady (Assa Sylla), Adiatou (Lindsay Karamoh) and Fily (Mariétou Touré). These girls don’t take shit from anybody and as Marieme joins them, she turns into Vic who goes after her own dreams.

This year’s start to the Viennale was strong, but it was Bande de filles that really blew me away for the first time at the festival this year. It was beautifully done, fantastically acted and absolutely striking. 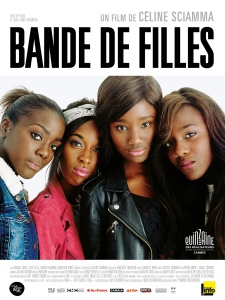 Bande de filles is a movie about women, about being and becoming a woman, about friendship between women, about poverty and violence, and generally about coming of age – and manages to never fall into a cliché even for a second. With all that, the film hammers home one point: how important female friendships are – and how difficult they are to keep when faced with (male) expectations and (male) interventions.

Of course, sex also plays a part in this and here Sciamma draws one of the most accurate, yet depressing conclusions: to be female is to be perceived as sexually available, and even if you try to look like and become like a man your safety is far from guaranteed. The only place to be safe is with other women – and those places are constantly undermined as well, at least if you play by the rules. No wonder that Vic finally comes to the conclusion that the life of a good girl is not for her.

It is rare to get a film that examines girlhood and female relationships in that way, so that alone already would have probably sufficed for me to love the film. But it is not all the film has to offer (I probably could write a paper on the hair and hair styles alone). One of its best features was the cast. Led by Karidja Touré and Assa Sylla, the girls have wonderful chemistry with each other and every second of their relationships is completely believable and true.

The camera work was great as well, creating beautiful images that should be at odds with the often not very beautiful story, but somehow capture it perfectly. Ultimately there is nothing about the film I don’t want to praise. I hope we get many more like it from Sciamma.