Plot:
Gary (Josh Charles) comes to Paris for a business meeting and quite suddenly he decides that he won’t be returning home anymore. Audrey (Anaïs Demoustier) works as a chamber maid in the hotel Gary’s staying at. Her interest is piqued by Gary but quickly moves away from him when she finds herself transformed into a sparrow. For both of them, the sudden shift in perspective means a re-ordering of their lives.

Bird People was charming and amusing, but it lacked a sense of direction for me. I would have liked to get a bit more focus, but I didn’t miss it too much.

I’m a little torn about the middle of the film. Generally the film was chock-full with little details that weren’t really necessary to the story but that made the world it was set in very much richer. But that very “little bit of everything”-ness also meant that the film felt a little longer that it was and than it should have been.

I also liked the feeling of the ending that was fittingly open for both Gary and Audrey, but it was also really short and I would have loved to get a little more interaction between the two of them now that they finally really saw each other. Also because I wanted to see a little more of a connection between them.

(At least I liked the beginning without any buts.)

Most of the film was really fantastic. It had a warm sense of humor that had me grinning and laughing out loud. The film also obviously liked its characters – there was a general sense of sympathy that is surprisingly rare. The cast was really good, too. Plus, that sparrow was amazing. I’m uncertain how much of it was actual (trained?) sparrows and how much CGI – which is really impressive.

All in all it was a sweet, somehow comforting movie (despite its painful moments) that I very much enjoyed. 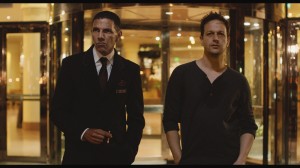 Summarizing: I left the cinema with a smile on my face.