Plot:
Jon (Domhnall Gleeson) dreams of becoming a musician. When he stumbles upon the idiosyncratic indie band Soronprfbs on the beach while their keyboardist tries to drown himself, he offers to step in for him that night. Band member/manager Don (Scoot McNairy) agrees after talking to Frank (Michael Fassbender), the band’s lead singer who always wears a big papier-maché head. It doesn’t take long and Jon is invited to join the band for good, despite band member Clara’s (Maggie Gyllenhaal) hesitation about him. But being part of the band isn’t at all what Jon expected.

From what I heard about the film before, I was afraid that it would be another hipster movie about oh-so-quirky people and an indie-soundtrack. But Frank might look like that but it is way, way more. I was really very taken by the film.

Frank is not a film about the egocentric growth (or lack thereof) of a young man as most of those indie films that I can’t stand anymore. Instead it’s a film about how Jon’s egotism and his hunger for fame and meaning hurts everybody around him. He wreaks havoc within the band, completely destroying their fragile ecosystem. Growth only happens when he realizes that it’s not all about him and that nobody owes him a fucking thing.

Plus, the film also completely destroys the idea that hardship and mental illness make you creative, that it is necessary to have issues to be an artist. Instead it shows that creativity and artistry can only happen in the spaces between mental illness and hardship – and the longer and more secure they are, the better.

The cast is also wonderful. I can only sing praise of Domhnall Gleeson, as usual, and Michael Fassbender is fantastic despite the fact that you don’t see his face for 95% of the time. Maggie Gyllenhaal is a force of nature anyway and Scoot McNairy is also quickly rising in my estimation. Together they do wonders.

The film is funny and sad at the same time, and it is definitely always smart. By the end, I even started to like the music, despite its strangeness. It just fit the film and when Frank sings in the end, I had tears in my eyes from the music, the ending and the entire story. 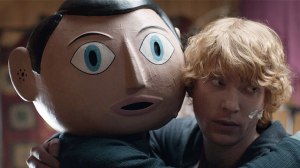 Summarizing: I loved it.