Plot:
Martin Luther King, Jr. (David Oyelowo) may have gotten the Nobel Peace Prize, but the fight for racial equality is far from over, which is proven again when a bombing of a predominantly black church kills four girls and injures others or when a woman in Selma, Annie Lee Cooper (Oprah Winfrey), is denied to registrate for voting, only the latest of many attempts of hers to do so. King makes voting legislation his next big topic, coming to Selma to start his campaign of civil resistance that is supposed to culminate in a march from Selma to Montgomery. But before things get that far, a lot of stuff has to happen first.

Of all the biopics I’ve recently seen, Selma was by far my favorite. The story is amazing, wonderfully told and the cast was absolutely mind-blowing. 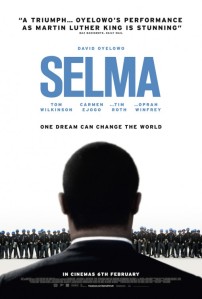 Much like Martin Luther King, Jr. was the charismatic center of the civil rights movment, David Oyelowo was the center of this film. His performance was mesmerizing and, judging from the little I have seen and heard of the real Martin Luther King, Jr., uncannily close to the original (seriously, that he wasn’t nominated for an Oscar is yet another proof of the faulty, racist politics surrounding that award. I know why I stopped watching it).

But again like King in the civil rights movement, Oyelowo is far from the only person or thing that makes the film work. The cast was completely amazing, from Carmen Ejogo and Lorraine Toussaint to Giovanni Ribisi and Tim Roth, to name only a few personal highlights. 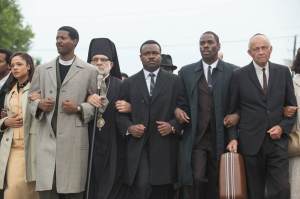 Equally impressive were the costumes and the general set design that really made it feel like we had travelled back in time to the 60s and the wonderful music that was featured in the film. DuVernay created a perfect atmosphere in her film, and a whole lot of tension – from the first bang she makes it clear that we are not talking about small stakes here, but about important and often dangerous, certainly life-changing politics.

The film acknowledges on the one hand King’s and the entire movement’s sucesses, without glorifying King as a person and on the other hand it also underscores how far we still have to come, globally, in matters of (in)equality.