Plot:
Master Gregory (Jeff Bridges) is a spook, a warrior and warden against the supernatural. But he’s the last of his kind, especially since his latest apprentice (Kit Harington) just met his unfortunate demise at the hands of the evil witch Mother Malkin (Julianne Moore). Malkin had been imprisoned for a very long while, but she managed to free herself and plans on taking revenge and get her power back. So Gregory hires himself a new apprentice, Tom (Ben Barnes), and together they will do anything in their power to stop Malkin.

Seventh Son was okay. Not quite as craptastic as I expected, but not good either. It was entertaining enough, but I kept wishing that I was in the film that Julianne Moore was obviously in, but the rest of the cast not so much. 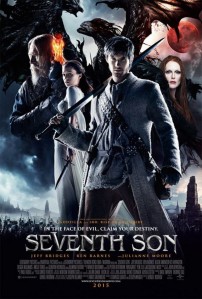 Seventh Son doesn’t really bring anything new to the table. It’s your typical hero’s journey stuff, with a rather bland protagonist in Tom, but an even blander love interest in Alice (Alicia Vikander). There’s a sacrificing mother (Olivia Williams) and a grumpy mentor turned even grumpier by the fact that Jeff Bridges apparently decided that nobody needed to understand him anyway, he’ll just mumble his way through the film.

And then there’s the glorious Julianne Moore who not only benefits the most from the costume designer (that was some awesome stuff there) but she decided that she’ll make this performance 100% epic. Everything about her is a wonderful mix between camp and gravitas. It’s not necessarily what you’d think of as good acting, but it is a great performance that breathes life into an otherwise rather one-dimensional villain. 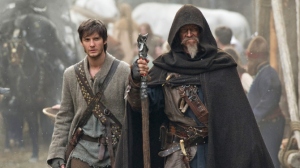 Special shout-out also goes to Djimon Hounsou, Kandyse McClure, Luc Roderique and Zahf Paroo and their tragically underused but potentially cool characters. I want to see the film where the four of them come together to form a more or less functioning team. It would also rid me of the bad taste in my mouth that the only PoC in the film are the villain’s sidekicks, with the added bonus of using real-world-(non-western)-cultures to inform their outfits and appearance and vilifying that as well. Yikes.

But despite the racism and the blandness, there was entertainment to be had, thanks to Julianne Moore. If it wasn’t for her, I’d file the film completely under skippable. So, it’s almost a pity if you don’t see it. Almost. 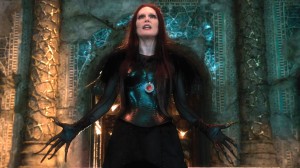 Summarizing: Eh. Entertaining, but mostly too “been there done that got the t-shirt”.