Plot:
Eggsy (Taron Egerton) is a specialist for getting in trouble. When he’s arrested and facing actual jail time, he calls a number on his dead father’s medal that Eggsy got from a co-worker of his father, with the instruction to call if he ever needed help. A short while later Eggsy is released and introduced to Harry Hart (Colin Firth). It turns out that Eggsy’s father belonged to a privately run spy organization – the Kingsman and Hart still works there. The Kingsmen have taken some serious hits recently and are recruiting. Hart sees potential in Eggsy and so Eggsy finds himself in an entirely unknown world a short while later – not only the spy world, but also the mostly snooty upper class.

Kingsman was a fun film that proves not only Vaughn’s talent for directing action movies with awesome soundtracks, but also that the spy genre can be made fun of very easily and very lovingly. It is not completely issue-free though, even if the good parts outweigh the issues.

Matthew Vaughn and Jane Goldman take some interesting departures from the original comic. For one, movie!Kingsmen are a privately run outfit, not part of MI6 (I wonder if that’s a symptom of the growing privatization of the security sector in general). There’s also the fact that Hart and Eggsy are not related anymore and that the movie emphasizes the training much more and making it much more elaborate. What I definitely liked that the training included (non-sexualized, competent) women, even if they kill the second off very quickly. One woman has to be enough. On that note, they also made Gazelle female – further convincing me that there needs to be an analysis of the sexualized disabled women in films who turn their own bodies into weapons. That Mark Hamill plays the first kidnapping victim (whereas in the comic it is Mark Hamill himself who gets kidnapped) was just plain wonderful.

But enough comparison between comic and movie, because the movie can stand very well on its own and, in my opinion, surpasses the source material by far. Even if it’s just due to the fact that the movie comes with a soundtrack and Matthew Vaughn really knows what to do with music in a film. In this case making heads explode, literally. (That might be the most outstanding soundtrack moment, but it is far from the only one.) 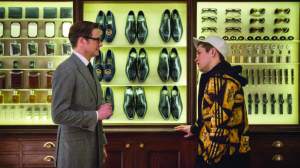 The film also has a very excellent sense of humor, even if it sometimes misses its mark. For example [SPOILER] that the princess not only offers Eggsy sex if he saves the world, but anal sex, is – on the one hand – a nice send-up off all the women throwing themselves at spies in every single spy film ever. But it’s also played too straight, reinforcing the notion that the male hero’s contribution is saving the world, while the women’s contribution to saving the world is offering herself as the reward, even if she might not have a lot of fun while doing so [/SPOILER]. Or the fact that the villainous Valentine lisps – which is obviously supposed to be funny but comes off ableist instead.

But other than that I really enjoyed the film and had a blast. I want to see Colin Firth kick ass a whole lot more, especially in beautifully choreographed and well-shot scenes like the one in the church.