Plot:
Michel (Jean-Paul Belmondo) graduates from thievery to murder when he shoots a police man who stops him in a stolen car. He knows that he can’t stay in France now, but returns to Paris to convince his girlfriend Patricia (Jean Seberg), an American journalist working for a newspaper in Paris, to run away with him. Patricia is not so easily convinced, though.

À bout de souffle is the first Godard film that I saw and I have to admit that I am a little baffled by it. From a theoretical point of view, I see its importance. That doesn’t make it any less boring, though. 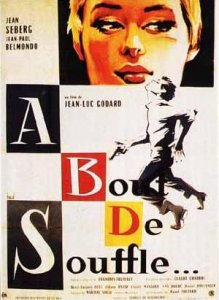 My main problem with the film was that I hated Michel. I didn’t think he was cool or fascinating or whatever, I just wanted to see him dead ([SPOILER] that he actually dies in the end is one of the few things I applaud in the film [/SPOILER]). An anti-hero can be intriguing. Michel isn’t that.

I liked Patricia a little better, but not much. At least I didn’t want her to die. But her fascination with Michel – I couldn’t understand that. Her decisions towards the end of the film where also kept rather cryptic, despite her explanation. But that bit I didn’t mind at all – ít gives the audience room to interpret the film and her actions as they see fit, which is a good thing. 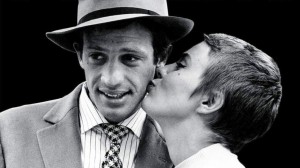 But mostly I was just very, very bored during the film. Without much of a story to speak of or characters that I connected with, there was really very little it had on offer. I mean, both Belmondo and Seberg are easy on the eyes and the film doesn’t look bad, but for me that’s not enough to make a film really interesting.

Without that spark of interest, there’s also no motivation to have all the (possibly very interesting) thereotical and cinema-historical discussion you could have about the film. I just don’t care enough about it to analyze it in detail. 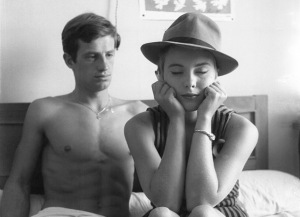 Summarizing: Not my thing.