Plot:
Sam (Maurice Luijten) is going on a camping trip with his boy scout group, despite the fact that neither the other boys, nor the scout leaders Kris (Titus De Voogdt) and Peter (Stef Aerts) seem to like him very much. Only Jasmijn (Evelien Bosmans) takes pity on him. When they find their originally intended campground occupied, they move further into the woods, despite the horror story Kris and Peter told the boys about Kai (Gill Eeckelaert) – a cannibalistic boy haunting the forest. It actually doesn’t take long for Sam to see Kai. But that’s not the only thing going on in the forest.

Welp is the first feature-length film by Jonas Goevaerts and Roel Mondelaers and that fact is distinctly felt: the movie is a little callow and has a generally unfinished air about it. But that doesn’t mean that it isn’t a commendable effort.

The film starts off strong, even though I did have my issues with it in the beginning already. For one, the token woman who gets to be carer and sex object at once and not much more beyond it was annoying as hell. But even worse where the two scout leaders. If that is actually how scouts are being run, it’s child endangerment and nothing else. I just couldn’t believe that anybody would let those two take care of a group of children and that seriously hampered my ability to suspend my disbelief.

As the film went on it frayed even further, especially when they start to try and surprise the audience with plot twists. [SPOILERS] If they had stuck with the version where the entire film is just a psychogram of an abused, lonely (pre-)teen spiraling out of control, I think I would have really liked the film. But they had to make it an actual bad guy killing people who may or may not actually be Sam’s real father and Kai may or may not be Sam’s twin brother. [/SPOILERS] It was just too out there. And it really screwed witht he film’s internal logic, further straining my suspension of disbelief. 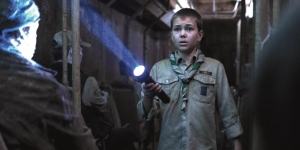 There are strengths here. There are the crazy forest traps that were kind of awesome (even if I wished that they were in another film). And Kai’s mask, his nest etc. – they really were something else. If only we had spent more time exploring the relationship between Kai and Sam, instead of with a million different, seemingly unrelated things.

Unfortunately because of all the bumps, the film’s strengths couldn’t quite fulfill their potential. Instead it felt much longer than the slim 85 minutes runtime which is never a good sign.

Summarizing: maybe the next one will be better.