Plot:
Simon Brenner (Josef Hader) used to be a police man, but after a, let’s call it a disagreement with his boss, he lost his job and now works as an ambulance driver together with Berti (Simon Schwarz). Brenner is not a very ambitious person and has settled in that life. But when a nurse and a doctor are murdered, and shortly afterwards one of his colleagues and another colleague is accused of the crime, his routine gets shaken up and Brenner finds himself investigating, rather in spite of himself.

Komm, süßer Tod has an excellent sense of humor and an interesting crime story, so it’s not surprising that it was the start to probably Austria’s most successful cinema series, even though from a film-making perspective it’s actually quite abysmal. 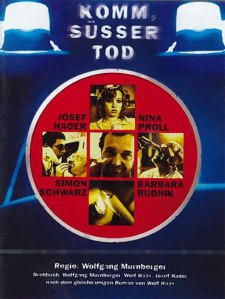 Komm, süßer Tod was not a small production (although the films in the series have grown bigger with each success), the filmmakers were already rather well-established and not inexperienced, so it’s honestly a mystery to me how the film was so incredibly bad on a technical level: booms were constantly hanging into the screen, the camera failed to keep up with the characters several times and generally it was just really rough. Maybe there’s a deeper reason behind that. If so, it didn’t show itself to me. Instead it looked just like incompetence. 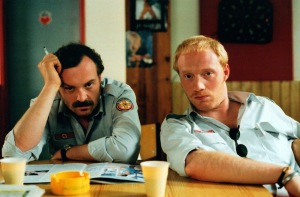 What makes the film instead of these weaknesses is its sense of humor, which is extremely dry, very dark and slightly bitter, making it quintessentially Austrian humor, delivered in such a way that you only realize a few seconds after the punchline that there just was a punchline. That brand of humor and its delivery is a trademark of Hader’s (who is not only an actor, but also a stand-up comedian) and it works beautifully.

I saw the film for the first when it came out, but I had since forgotten a lot. I just remembered liking it, which meant that my expectations were high. But I’m glad that the film could fulfill them again, despite the technological deficit.