Plot:
Nancy (Lake Bell) has made herself a promise: she’s going to put herself out there. Well, at least more than she used to, which is not at all. When Jack (Simon Pegg) mistakes her for his blind date and she feels an instant connection to him, Nancy decides to just go for it. They spend a great date with each other, but Jack is bound to find out that Nancy isn’t actually Jessica (Ophelia Lovibond) – and what then?

Man Up was sweet and funny and exactly what you’d expect and want it to be: a RomCom of the best kind with perfect leads. 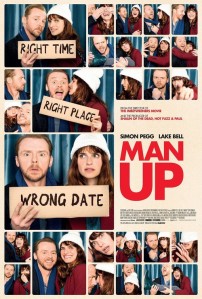 I’ll just go right ahead and say it: nobody does awkward like Lake Bell. It’s glorious. And when she’s joined by Simon Pegg, it gets even better. Those two are a real dream team and have very palpable chemistry, which is a very good thing for this kind of film. They are also joined by some wonderful supporting characters. Especially Ophelia Lovibond’s Jessica was really cool.

The only thing I’m not entirely sold on is the plot around Sean (Rory Kinnear): [SPOILER] he was in high school with Nancy. He is absolutely in love with her and has been since then, even though they haven’t seen each other. He knows things he shouldn’t know, obviously stalks Nancy and is obsessed with her. And while the movie never goes so far as making it look like it’s okay – Sean is consistently creepy – the entire thing is played for laughs and in the end, he gets away with it, can spend an evening in Nancy’s family with Nancy and carries (what he believes to be) her scarf off into the night. That is not how things should end for a creepy stalker. [/SPOILER]

But other than that I really enjoyed the film, in particular because both Jack and Nancy are not completely young (like teenagers or in their twenties) anymore and both therefore bring their baggage to the table. Baggage that isn’t just easily dealt with and discarded by the end of the film, but that needs work. And sometimes it’s easier to work on that stuff together.

And when you tell a story about characters like that with a nice sense of humor and a whole lot of warmth, there is nothing much that can go wrong anymore.

Summarizing: awesome times were had by all, goofy grinning ensued.