Plot:
Rusty Griswold (Ed Helms) is trying his best to lead a good and successful life, but success won’t come and his family is slowly drifting apart. He decides that the perfect antidote to that would be to take them all on a trip. To Wally World, where he spent a vacation when he was a child. His wife Debbie (Christina Applegate) and his two sons James and Kevin (Skyler Gisondo, Steele Stebbins) are less convinced that a road trip would be such a great idea, but they decide to go along with it anyway. As soon as they set off, though, Murphy’s Law comes into effect and everything that can wrong, does.

I had actually no intention of seeing this film as I thought that it wouldn’t be my cup of tea at all. (I think I saw the original when I was a kid, but I don’t know whether I ever saw any of the sequels.) But then my sister and nephew went and asked if I wanted to come along and I agreed. The film may still not be my cup of tea, but I didn’t find it as horrible as I thought I’d find it. And my nephew and sister had a blast.

If you’re looking for sophisiticated humor, you’re not going to find it here. But that wasn’t to be expected anyway. And even though there were some moments that were definitely not funny to me (bathing in fecal matter is less funny and more simply disgusting in my book; and the entire rape joke thingy around the truck driver wasn’t exactly offensive, but neither was it funny), others were beautifully done. I particularly loved the scene where the went rafting: the way image and sound were juxtaposed was nicely executed and Charlie Day was great as well. Though I also liked the scene at the Four Corners Monument.

Mostly, though, what kept me entertained during the film was not only the moment where I had to explain to my 11 year old nephew what a rim job was, but to keep an eye on the gender policing that goes on in the film. Because I have rarely seen a film that makes it so perfectly clear what it is to be a man than this one. That is seen in Rusty who has to live up to the responsibility of keeping his family together and has to learn how to stand up for himself – failing either of those makes him a wimp, a coward maybe, a softie, but not a man. 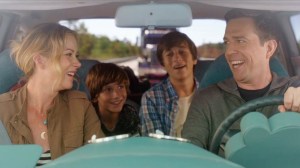 But this is also echoed in the two sons – Kevin and James. James is the older one. He is quiet, he likes to play the guitar and to read. Kevin is a little terror who likes nothing more than to tease his older brother and generally be the quintessential boy. James actually attracts a girl who  seems to like him, despite his “lacking” masculinity – therefore getting the girl, much like his nice and awkward father got the most popular, beautiful girl at uni. But it is only when James loses his patience and actually hits Kevin back that both Kevin and his father pay him any respect as a person and start to see him as a man. Clearly what we get here is a concept of masculinity that lives by not being too soft or sensitive (in fact, being too sensitive in this film becomes an act of autoaggression as shown in the rafting instructor), but rather that reproduces a patriarchal notion of a man taking care of himself and his loved ones by demanding and commanding, if necessary with force. And this notion is something that is almost entirely enforced in homosocial circles, meaning between men; women hardly play a part in it.

Anyway be that as it may, this is probably not something that the filmmakers thought overly much about (making it even more interesting in my opinion). In fact, it doesn’t feel like anybody thought too much about anything when making the film. And if you go along and turn off your brain with them, you’ll have fun.