Plot:
Natalia (Beatriz Arjona) comes from Spain to Mexico because her boyfriend Esteban (Diego Luna) lives there. But Esteband got held up by work, so Natalia spends a weekend with the girls – Ana (Anajosé Aldrete Echevarria), Valeria (Ximena Gonzalez-Rubio) and Sofia (Flor Eduarda Gurrola). Natalia doesn’t immediately connect with them and vice versa but after they start partying, they warm to each other. Spurred on by the others, Natalia starts flirting with a cowboy (Iván Arana). But their evening takes an unexpected turn when the women decide to kidnap and torture the cowboy.

Me quedo contigo was not only yet another rape-y /slash film, it also took what could have been an inversion of the “guys abuse women” setting and somehow made it even more misogynistic.

I’ve seen more than one film that basically consists of a man/men torturing a woman/women and the audience is supposed to get a kick out of her suffering. So seeing that being turned on its head could have been a powerful thing. But the way Narro frames the story and introduces both the women and the violence into the story, it just doesn’t work out that way.

Instead it makes it seem like a group of women out on their own and having fun among themselves is something so abnormal that it seems like the next logical step is that they must turn violent and abusive towards men. Natalia seems to have misgivings about that particular turn of events for about 30 seconds, but then she is there and participates just as much as the rest. That ease with which all those women torture and maim the guy gives the film a misogynistic flavor that I found incredibly hard to stomach. 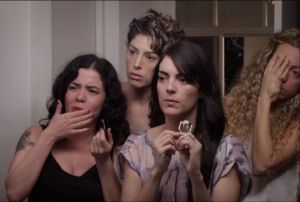 And that they desperately tried to make this into a comedy doesn’t help things either. Rape just isn’t funny, whether the victim is male or female. I could see myself laughing about karaoke with a dick microphone, but not while the owner of said dick is being tortured with it.

But not only did I find the entire set-up tasteless and misogynistic, thought Diego Luna was wasted and didn’t understand why Esteban was necessary as a character at all, the final death-blow was that the movie ended up being boring as hell. That is really not how I like my films.

Summarizing: Despite the surprising appearance of unicorns in the film, skip it.