Plot:
Dennis Nash (Andrew Garfield) is trying his best to keep the family home together where he lives with his mother Lynn (Laura Dern) and his son Connor (Noah Lomax). But work has been sparse and now they are threatened with foreclosure. After a last attempt at court, Dennis finds the police and bank representative Rick Carver (Michael Shannon) in front of his house, putting him and his family on the street. Dennis is at a complete loss, but by chance he actually finds a job with Rick who doesn’t exactly work above the line in all places and rakes in quite a profit.

99 Homes is a well made film that is quite clear in its criticism of capitalism – which is much appreciated. But it’s also a film that is a little too hopeless for my taste.

As I grow older I find myself sliding along the left political spectrum away from the center (which I was never particularly close to in the first place). So any story that criticizes capitalism is a story that gets immediate bonus points from my side. And 99 Homes is very effective in showing what an abominable system capitalism is, a system that makes us all accomplices whether we want it or not, that draws us all in and enters even the most private parts of our lives. It’s an ugly, inhuman system, especially when left completely unchecked.

Unfortunately 99 Homes stops there. It doesn’t give even a single however small possibility of an exit. There’s not even a private coping strategy that it allows: your either enthusiastic part of capitalism, or you go under and disappear. And any halfway decent part of you that isn’t participating fully will find the same fate. That totalitarity, while not exactly inaccurate, ultimately torpedoes the criticism. Instead of producing outrage that could give energy to change, you’re stuck with the depressing finality of immutability. We’re all stuck, might as well give up. And that’s not how I like my criticism. I don’t believe it’s true. Nothing is that total.

Apart from that emotional tone, and the fact that the movie barely had room for any women at all (making capitalism a man’s game where women are just chips to be moved), I quite liked it. Michael Shannon and Andrew Garfield (who is probably the prettiest crier currently working, although he still looks disconcertingly like my brother) give great performances.

The third star of the film, though, is definitely the cinematography and the amazing color scheme and lighting Bahrani and cinematographer Bobby Bukowski work with. There’s a brightness to it that somehow manages to make things feel clear, unreal and muted all at the same time. Those visuals alone would make the film worth seeing, but it’s not the only thing about it. 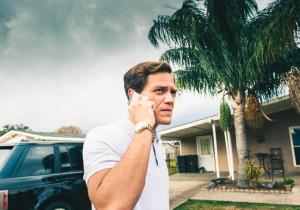 Summarizing: Despite some shortcomings recommended viewing.