I’m not saying that Anchorman didn’t work for me at all. There were moments where I honestly laughed and where it’s simply hilarious. I don’t mind a little silliness. And, as I said, it’s an incredibly quotable film. Personally I need the phrase “that escalated quickly” a lot, for example.

But often the film is just too offensive for my taste, punching down in its humor rather than up. They have no problem with casting Ben Stiller as a latino or with having clearly mentally disabled Brick be the butt of many, many jokes that are all about how stupid he is. And even though the film makes fun off the sexism of the 70s, it never really manages to work past it. Veronica might be a kick-ass reporter who fights for her rights, but it is a constant point that she’s hot, and in the end her professional fight becomes absolutely personal with Ron. And those are just two of many problems with that particular brand of feminism.

But honestly, I didn’t expect a thoughtful feminist examination of workplace harrassment and disadvantages form the film anyway. That they talk about it at all is kind of a win. A small win, but nevertheless. If the film had stopped to think much about what it’s doing, it probably would have lost that frantic energy that is a huge part of what makes it work in the first place.

Still, I would have rather taken a less frantic and silly film over one that is so much hit and miss with the jokes for me. I can see why it became a cult classic, but I won’t be joining the cult. 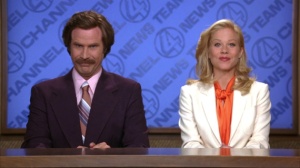