Plot:
Argan (Joachim Meyerhoff) has many, many health issues. Practically no organ is unaffected. Or at least that’s what he thinks. Fortunately he has a doctor and a pharmacist to take care of him and provide him with all (un)necessary medication. But all of that is getting quite expensive, so Argan hatches the plan that his daughter Angélique (Marie-Luise Stockinger) should marry a doctor. Thomas (Simon Jensen), son of his current doctor Diafoirus (Ignaz Kircher) seems to be a good match. It is only too bad that Angélique has her eyes set on somebody else already.

I have to admit that the play itself didn’t do that much for me, but the production we saw was absolutely stunning and managed to make a whole lot of it. 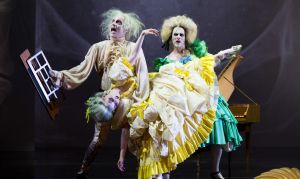 It is, of course, hard to separate the play from the production, but I do get the feeling that had I seen the play in another production, I wouldn’t have had nearly as much fun with it as I did. It is not only that the cast was great, the way everything was put into scene pushed the entire thing even more into an absurdist direction, and it did the play good with that decision.

It starts with the costumes that are somewhere between baroque and punk, each character having their own color (only the doctors all get the same outfit). But those (lovely neon) costumes are only the start. Director Fritsch decided that the flourishes of the costumes and the almost surreal tones of the play should be echoed by the cast themselves. So there are idiosyncratic voices and above all strange movements throughout the play. When Angélique is under pressure, she actually vibrates. When Antoinette (Markus Meyer) doesn’t simply jump through Argan’s hoops, she does jump through the scene as she pleases. Argan is constantly shaking, seemingly at war with his own body. 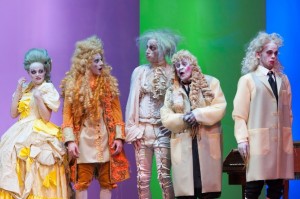 That acting style, combined with the costumes and the set design – mostly consisting of huge x-ray images really give the production a special flavor. I was so busy taking it all in, I didn’t even have time to mind the cembalo music that was interspersed throughout the entire play and that I usually really don’t like.

However I wasn’t too busy to laugh and there are really many opportunities to do so. I’m not really inspired to read Molière after this night, but I would certainly watch this production of the play again in a heartbeat. 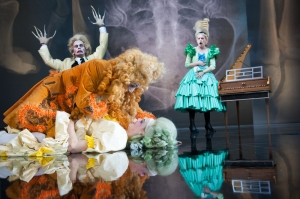