Plot:
Sin-Dee (Kitana Kiki Rodriguez) just got out of prison and meets up with her best friend Alexandra (Mya Taylor). As they catch up, Alexandra wanting to make sure that Sin-Dee turns up that evening for her singing show, Alexandra lets slip that Sin-Dee’s fiancé has strayed while she was in prison. And not only that, he is fucking a white, cis woman. Sin-Dee is outraged and decides to seek out the other woman to stake her claim.

Most of what you hear about Tangerine is that it was shot with an iPhone (and here I go, too). But that is honestly the least awesome and least important part (although it is awesome and important) about this film. Tangerine is funny and full of energy and damn wonderful.

That doesn’t mean that Tangerine glosses over the hard parts: not only was Sin-Dee just released from prison, we see the unglamorous sex work (more often than not, films that feature some kind of sex work are about [bored housewives who become] high-end escorts) and we see harrassment that comes with being trans women (of color). But these hardships aren’t what define Sin-Dee or Alexandra, they are just part of their lives. And the film mirrors that. 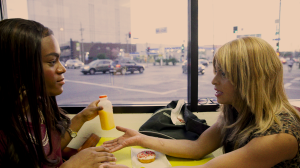 The story it tells isn’t necessarly new, even though the setting is new for that kind of story. But thanks (mostly) to Rodriguez and Taylor there is a relentless energy to the story that sweeps you along and barely leaves you time to catch your breath as you try to keep up with Alexandra and Sin-Dee.

I don’t think that this film could have been shot with bigger, fancier and ultimately more expensive equipment. If it had been done, it probably would have lost a lot of its immediacy. And how awesome is it, that our technology has advanced so much that it is possible to make films with technology that needs a comparatively small budget and not that many people?! Let’s hope that it means that we’ll get many more films like Tangerine. 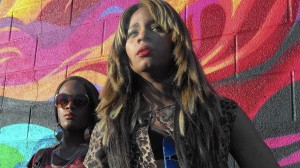 Summarizing: Awesome and funny, you should definitely see it.