Les Liaisons dangereuses is an epistolary novel by Pierre Choderlos de Laclos. [I read it in the German translation by Heinrich Mann.]
Finished on: 29.1.2016

Plot:
The Victome de Valmont and the Marquise de Merteuil are thick as thieves, united in their love to manipulate and destroy the people around them, a skill they have so artfully mastered that their ploys don’t fall back on them. Both have a new project: Valmont is trying to seduce Madame de Tourvel who is staying at his aunt’s summer home and who is widely known for her morals and her loyalty to her husband. The Marquise, on the other hand, is looking for revenge on an ex-lover who just got engaged to the naive Cécile who has spent pracitcally her entire life in a convent. So she enlists Valmont’s help to completely corrupt Cécile.

I read this book for the first time when I was in school and I was very much intrigued by it, to say the least. But I haven’t re-read it since, so I was a little worried whether it would still hold up to scrutiny. Nevertheless, when it was announced that they’d show the play here, I figured it’s the ideal opportunity, to revisit the material (I almost finished it before seeing the play, too). Fortunately, the book is still fantastic in very many ways. 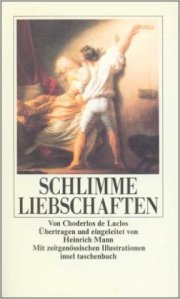 When I read Les Liaisons Dangereuses for the first time, I was fascinated by the (lack of) morality of its two protagonists as much as I loved the form (it was one of the first epistolary novels I ever read). I remember being vaguely uncomfortable about the ending though I couldn’t exactly put my finger on why the Marquise’ punishment would make me squirm. Now I know that it’s the blatant misogyny that becomes apparent there, as pretty much all the women are punished and the only one who gets to redeem himself at least a little is Valmont – and that seems so out of step with the rest of the book.

Not that it is a feminist propaganda piece. It is almost 250 years old and many of the sexist conventions of the times aren’t questioned at all. But the fact of the matter remains that the book features not only some of the most complicated and diverse female characters who all get to be very different but firm personalities. And time and again the Marquise points out the patriarchic oppression of women and the sexist double standards applied to them (especially in the lettere where she talks about how she came to be who she is). It is astonishing that a man of the time could and would formulate these things so clearly and so obviously, and yet when it comes to drawing conclusions from this injustice, there are none.

Still, Choderlos de Laclos was a wonderfully attentive observer of people and their psychology, touching on behavior that would get a name only much later. For example, the Marquise gaslights Cécile after being raped by Valmont, so much so that Cécile accepts rape as completely normal part of her sexual education. I doubt that Choderlos de Laclos would have seen it that way – I’m pretty convinced that he saw (and wrote) Valmont’s rape as a seduction, despite the countless times Cécile says no, but the way it is written allows for more wiggle room, an oppositional reading.

The story itself is actually not that important as are the relationships and the characters. Even after all this time, they are vibrant and pracitcally leap off the page. Even though I now loved the book for different reasons than I loved it when I read it the first time, I still loved it a whole lot.

Summarizing: Among my favorites.