Plot:
The Victome de Valmont (John Malkovich) and the Marquise de Merteuil (Glenn Close) are thick as thieves, united in their love to manipulate and destroy the people around them, a skill they have so artfully mastered that their ploys don’t fall back on them. Both have a new project: Valmont is trying to seduce Madame de Tourvel (MIchelle Pfeiffer) who is staying at his aunt’s (Mildred Natwick) summer home and who is widely known for her morals and her loyalty to her husband. The Marquise, on the other hand, is looking for revenge on an ex-lover who just got engaged to the naive Cécile (Uma Thurman) who has spent practically her entire life in a convent. So she enlists Valmont’s help to completely corrupt Cécile.

After having so recently seen the play that was the starting point for the film, I must say that I was very much disappointed by the movie. I thought John Malkovich was miscast and the film never really finds its step. Michelle Pfeiffer is a sparkling star in it, though. 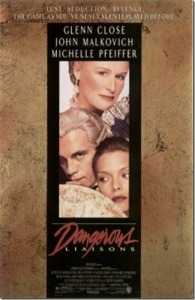 I usually like Stephen Frears’ movies, but in this case something was sorely missing: the love for the language and the innuendos that was so obvious in the play and the novel itself. Although Valmont and the Marquise here often say the same words as in the play/the novel, not a single wink or suggestive moment makes it into the film. Everything is completely serious and smothered in floral patterns (as is only fitting for the time period).

The trouble starts with the fact that whoever decreed that John Malkovich is a sexy seductor, was very much mistaken, so his Valmont always comes with an undercurrent of “why the fuck are they into him that much?” Glenn Close also struggles with her character but more because Frears direction leaves out a lot of the Marquise’s complexity. What remains is a malvolent, jealous husk of the complicated villain I love. It also doesn’t help that the film sticks with the punishing morality of the novel in the end and completely destroys the Marquise, even reveling in that destruction. 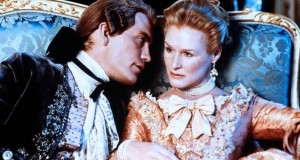 Where the film wins, though, is in Michelle Pfeiffer’s portrayal of Madame de Tourvel. She gave me goosebumps more than once and here the film delivers the most thoughtful and accurate take on a character who isn’t always treated with such consideration. Unfortunately here, too, the film sticks with the antiquated morality of the book too much and can’t suffer her to live.

Dangerous Liaisons, for me, never achieved the height of Valmont (which I’ll review shortly) and re-watching it now, even after many years, it still confirmed that opinion. It’s not a bad film, but compared to what can and has been done with the material, it just doesn’t really fly. 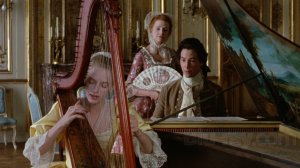 Summarizing: could be worse, but could be much better, too.