Plot:
Edited together from clips from over 200 films, most of which are around a hundred years old or older [here’s the full list], and narrated by Tilda Swinton, Dreams Rewired examines our relationship with technology and technological change.

Dreams Rewired doesn’t cover new ground. Sometimes it feels like half of the essays out there, cinematic and otherwise, is about our relationship with media and technology. More often than not there’s a distinctly anxious undertone of modern estrangement, losing touch with the world and not being able to connect with the humanity around us anymore (bleargh). Now, Dreams Rewired isn’t absolutely technophobic, but that anxiety is certainly there and they never do anything with or about it which quickly becomes pretty annoying.

A tremendous amount of work has gone into the montage of the film. Finding all those film clips and putting them together so that they can support the message the film is trying to convey – it’s no wonder it took them years to finish the film. The clips are certainly great and well worth watching, if only for their retro ridiculousness.

But in the assembling of the clips, I feel like the message got lost or at least very muddled. Or maybe there was never a clear message to begin with. The only clear point I could make out is that there have always been technological advances and people have always reacted to them. Which is… not a whole lot of point to have. If you want to show ambivalence, you have got to show both sides of the coins, not just say that there are two sides. But I’m not even sure that they were aiming for that. Rather I assume that they were trying for neutrality and that just means that they fail to portray any point of view (like in 9 cases out of 10 where neutrality is the goal). 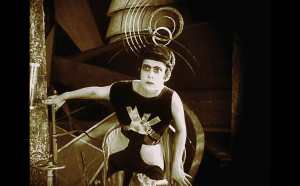 They were very lucky to get Tilda Swinton to narrate the film. Not only because Swinton has a wonderful voice full of expression and is the perfect person to narrate such an idiosyncratic film, but because she even manages to make the script sparkle every once in a while.

That is very hard work because the script sucks. Not only does it fail to really make a point, but it does so with prose that feels like it was written by a young, serious college student who just started taking philosophy 101 and has been reading Horkheimer and Adorno in his spare time, is now really impressed with dialectics and doesn’t get it yet. But he thinks he does and so he writes this impassioned essay, that he works very hard on but that nevertheless isn’t quite as deep and meaningful as he thinks it is.

At least every once in a while there is a joke.

Summarizing: the film aims commendably high and falls, but at least it doesn’t fall all the way.