Plot:
Rockstar Marianne Lane (Tilda Swinton) is on holidays, recovering from throat surgery that affected her vocal chords. She is spending her time in Italy together with her boyfriend, photographer Paul (Matthias Schoenaerts) in companionable calm and silence. Until her ex-husband and ex-producer Harry (Ralph Fiennes) shows up with his daughter Penelope (Dakota Johnson), a daughter he only just recently met himself. Harry and Penelope both bring their own special kind of trouble to the formerly so idyllic stay.

A Bigger Splash starts off strong. While the cast manages to keep up the strength throughout, the plot does not. But with that much chemistry between everybody involved, I can certainly live without much of a plot. 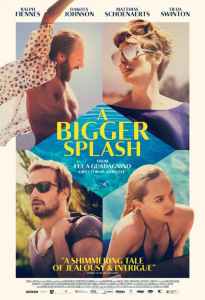 Harry is an unusual role to play for Fiennes who isn’t exactly known for his exuberant, manic performances. But maybe it’s precisely because of this that he was able to cut loose so much and give everything he’s got to Harry. He feels like a force of nature. It takes an extraordinary counterweight to be able to face him, and with Tilda Swinton in a very withdrawn, but expressive performance, the film has just that.

Next to them, anybody would have difficulty to shine and Schoenaerts and Johnson take an obvious backseat. Though that is not only due to Swinton and Fiennes, but also because neither the script nor Guadagnino actually seem interested in Paul and Penelope as much as in Marianne and Harry. While Schoenaerts still gets a whole lot out of Paul anyway [and had me on the edge of my seat, hoping that he would not turn out to be a dick], Johnson’s Penelope remained rather colorless and impenetrable.

For me, it was Penelope who kept the film from becoming as good as it could have been. Not because of Johnson, but because there is some Lolita shit going on with her character – and the film plays her as the conniving seductress way too straight. I didn’t buy it. I didn’t even want to buy it.

I would have been pretty much perfectly happy with watching these four people collide and nothing more happening, so much so that I felt almost bothered when there was an actual plot towards the end of the film. It felt like an intrusion. I would have preferred it without the big drama, but it obviously wasn’t to be. Drama or not, A Bigger Splash is worth watching for characters and performances.