The Fall is the second novel in The Strain Trilogy by Guillermo del Toro and Chuck Hogan.
Finished on: 1.9.2016
[Here’s my review of The Strain.]

Plot [with SPOILERS for the The Strain]:
The vampires have effectively taken over the world and the Master doesn’t need much more to achieve his goals, supported by billionaire Eldritch Palmer who is still hoping for immortality. In New York, there are only a few pockets of resistance left. One of them is the group surrounding Ephraim and his son Zach, who are both still reeling after Zach’s mother and Ephraim’s ex-wife Kelly was turned into a vampire. Their group further consists of Abraham Setrakian who has been fighting vampires all his life, Nora Martinez, Ephraim’s former colleague at the CDC and Vasily Fet, an exterminator who sees vampires as yet another pest. On their own, they will stand no chance against the vampire threat. But they still have to try.

The Fall couldn’t quite keep up with The Strain, taking a few turns that I didn’t like that much and leaving a couple of things unclear. I still want to know how everything will end, but my enthusiasm has notably cooled. 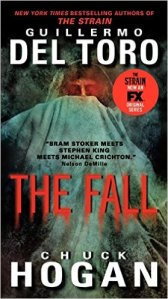 The Fall starts with the announcement that the apocalypse has already happened, that vampires have taken over everything. New York has descended into chaos. There’s a list of cities around the world (except for Africa – that continent still seems to be safe) which seem to be in a similar state of disorder. But from what I then gathered from the rest of the book, things aren’t that far gone yet, at least not everywhere. There are (bureaucratic) structures in place still. It made the actual state of the world rather hard to grasp and made me wish that they had just focused on New York instead.

But anyhow, that’s not the thing that bothered me most in comparison to the first novel in the series. What bothered me most was that they didn’t care that much about the science anymore. Where the first book seemed well-researched and giving us a halfway plausible scientific explanation for vampires, here things turn way more fantastic. Where vampires in the first book operated on some kind of reactivated memory which brought them home and thus led them to attack their own family members, in the second book they suddenly have a kind of location sense that leads them to where their family members are, wherever that is. And while they still try to explain that scientifically, it doesn’t ring true anymore.

Additionally they changed Vasily (rather subtly, but still), shifting him from one of my favorite characters in the first novel to somebody I didn’t even particularly like. At least the plotline surrounding Gus that left me wondering the most since finishing The Strain was as interesting and engaging as I hoped it would be.

With some of the strengths of the Strain becoming brittle in The Fall, it’s weaknesses stood out to me more. That’s above all it’s treatment of the few women there are in the book at all and who are all sidelined and paid much less attention to than the men, but also the fact that the entire thing feels a little repetitive.

[ETA] There’s also the fact that they introduce the “feelers” in this book: basically, the vampires blind an entire busload of children, then turn them into vampires when they’re on their way to blind camp to learn how to deal with their new disability. And that is not just a bad plan, it relies entirely on the ableistic and wrong assumption that just because a person loses the functionality of one sense, the other senses get (immediately and magically) stronger to compensate for that. Fortunately we don’t spend too much time on this particular subplot.

I will still read The Night Eternal, hoping that it can get the verve of the first novel back, but right now, I’m not expecting too much anymore.