Plot:
Kati (Jana McKinnon) spends her summer with her grandmother (Renate Hild) and her little sister Pia (Pia Dolezal). There’s a vulnerability in the air. Kati has asthma and seems depressed, her parents are not in the picture, her grandmother’s death seems just around the corner. Kati tries to take everything on, but she’s only 15 years old and things are bound to overwhelm.

Jeder der fällt hat Flügel manages to create an interesting atmosphere with engaging imagery but I wasn’t really able to connect with the film. In fact, my reaction was mostly boredom and a certain annoyance at the artsy-fartsy symbolism of it all.

The film starts off well enough and for a while, the images and atmosphere and the general set-up kept me going and interested. But after a while the dreamlike structure served in achronological bits started to wear on me. It never really seemed to lead anywhere and I couldn’t connect with the film enough to enjoy the traveling itself: I wanted the film to have a destination.

My frustration just grew with each turn the film took and each layer it added to what little of the film was story in the first place. Through it all I couldn’t help but feeling that the film thought it was being very clever, but it simply wasn’t as insightful as all that. Not that there wasn’t anything to it, but it felt like a lot of silky wrapping paper for a very normal pair of socks. As you go through the paper, a little annoyed at the sheer amount of wasteful packaging, you expect to get a beautiful pair of stockings. Instead you get a pair of socks in the end that is definitely useful and they’re perfectly functionable, but you were just dreaming of that pair of stockings. And to make it all worse, the person handing you the gift obviously thought that they gave you the stockings you dreamt of and are now looking at you expectantly. 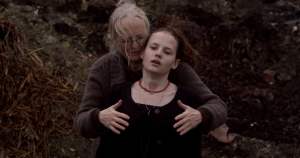 I wanted to like the film – it’s rare enough that we get women-centric stories (especially in Austrian movies) and while I’m not the most artsy person imaginable, I like it when films leave room for interpretation. But much like Brunner’s first film Mein blindes Herz, Jeder der fällt hat Flügel didn’t manage to use its symbolism in a way that felt deep to me, but only pretentious. And if there’s something I can’t stand, it’s pretentiousness. No amount of interesting images will or can change that. 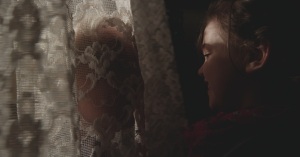 Summarizing: Didn’t convince despite some strenghts.