Plot:
Ten-year-old Michi (Luis Vorbach) lives in a foster home. His mother has died, his father is unknown to him. But the one day he finds a letter that his mother never sent and its addressed to Michi’s father. He is overjoyed and nervous, but his dreams of the perfect father who will take him away and give him a real home are shattered when Michi finds out that his father – Tom (Jordan Prentice) is just as tall as he is. When Tom shows up at the home, interested in his son, and the other kids start making fun of Michi, he can’t stand it. Michi runs away. When the police find him a short while later, it’s Tom’s address he tells them and the two start the difficult process of trying to figure out this parent and child thing.

Auf Augenhöhe is a film that wants to teach children something and it does so with a lot of heart and in a very sweet way. 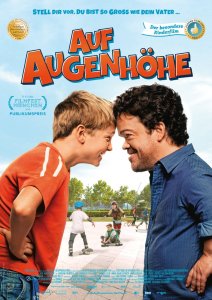 As somebody who didn’t grow up in foster care, but closely connected to it – my parents ran a foster home for decades and for a long time there was no separation between our family home and the foster home – the way foster care is usually portrayed in films jumps out at me and more often than not not in a good way. In this case, they managed to capture the feeling of a modern foster home rather well, I thought with all its ambivalence: the friendships formed but also the sometimes cruelty of children; the loving care of the adults, but also that they can never be a substitute for the parents themselves; the being comfortable in the home, but always dreaming of “a real family”.

And yet there were inaccuracies in procedures (or at least what felt like inaccuracies to me – I don’t actually know the German system, just the Austrian) like the fact that Tom was never asked if he wants Michi to stay with him and even after [SPOILER] it turns out that he isn’t Michi’s biological dad [/SPOILER] this would have been a possibility.

But even better than the treatment of the foster care system was the way they dealt with Tom’s short stature. Of course, it’s an issue for Michi who has imagined this idolized version of a superhuman as his father, but it’s only one of many issues the two have to work out. And the film shows with a lot of matter-of-fact-ness both the discrimination and challenges Tom faces that bigger people don’t face, and the many ways his life is just as any other. And they even manage to show that there absolute advantages as well for Michi to have a father who is the same size as him: like having a perfectly sized kitchen where nothing is out of reach or being able to borrow his cool leather jacket.

Dollhopf and Goldbrunner manage all of that without becoming preachy – instead they build a story with an emotional core that rings true – all of that other stuff is just details added to that central emotion. That makes it easy to forget the weaker moments of the story and just lean back and enjoy. And that’s what I did.