Plot:
Shideh (Narges Rashidi) was barred from university because of her leftist politics, but now she hopes to return to university as the war between Iran and Iraq shakes Tehran. But it doesn’t work out that way. Downcast, she returns home to her husband Iraj (Bobby Naderi) and their daughter Dorsa (Avin Manshadi). When her husband – who works as a doctor, is called in, Shideh and Dorsa remain alone in their apartment. Iraj urges her to go to his parents’ place, but Shideh doesn’t want to confront his family, especially not after the bad news she’s had, and Dorsa is feverish, so she remains. When a missile strikes their building, the already fearful Dorsa is increasingly disturbed. And it does seem like something entered their home with the wind that now blows through the cracks.

Under the Shadow doesn’t just offer an absolutely interesting setting with Tehran in the 80s, but it’s also a super creepy film that manages to really scare. I loved it. 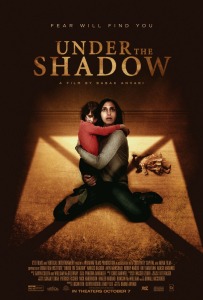 Under the Shadow is a beautifully made film with a great cast and the most perfect use for a chador in a (horror) film ever [yes, even better than in A Girl Walks Home Alone at Night] (that scene where there’s suddenly fabric everywhere was not only visually a masterpiece but also frightening as fuck).

And as I said, it generally scared the living daylights out of me. But the film isn’t just scary, it invites interpretation and dissections of its symbolism. Because there is a lot of it and it’s just ambiguous enough that you’re pretty certain it is supposed to work out coherently, but also that it isn’t completely clear and obvious what that coherence is.

I was wondering mostly about the role of the monster. It could be interpreted as War Violence itself that comes inside your home and there’s really nothing you can do about it. There’s no real protection against it, and the things you love the most will become your biggest source of danger because you will try to protect them and keep ahold of them. The only option you have is to forget everything, your life before the war, the idea of safety, any kind of material souvenir. Ultimately you can only leave yourself behind if you want to survive.

It’s a bleak interpretation [then again, war is bleak], but it’s the one that seemed to work best for me. But I’ll probably have to watch the film again to make sure whether it really works out. I will gladly do so once I gather enough courage to be as scared again.

Summarizing: Be prepared for major goosebumps, but watch it.