Plot:
When Harry (Brandon Maggart) was a child, Santa was demystified for him rather abruptly. Now Harry works as a toy maker and tries to get the Christmas spirit back. This has become a rather big obsession for him, with Harry slowly turning himself into Santa Claus. But after a couple of incidents at work, Harry snaps and starts believing he really is Santa – and most people around him are rotten and need to be punished.

Christmas Evil starts off strong but couldn’t keep my attention for the entirety of its duration. There’s a lot to like, but some things simply didn’t work in its favor. 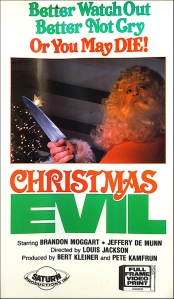 I liked the set-up of the film that has a certain sly sense of humor and political aspirations – certainly more than a lot of slashers do and that is always appreciated: Harry doesn’t just take revenge, he doesn’t just go crazy, he’s rebelling against a society that he perceives as going very wrong, a society that cost him his sanity.

While this set-up is building, I really enjoyed the film. But when it turns to the killing spree Harry embarks upon, it did lose me. Christmas Evil is a slow-paced film (and it was programmed rather late as well, pushed out even further by a skype interview with the lovely director), and that just didn’t lend itself all that well to the bloodbath. I kept nodding off here and there for short bits during that part, but I never really felt like I actually missed all that much. 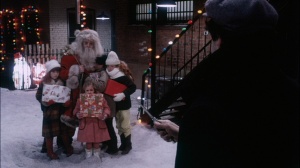 That being said, I really wouldn’t mind watching the film again (at an earlier hour) and see if I didn’t like it better a second time around – because I do believe it has a whole lot of potential and it could very well be that a second viewing will make it easier to discover that potential. And how often can you really say that about Christmas slashers?

Summarizing: Deserves to be seen.