Magdalena Sünderin [literally: Magdalena Sinner] is a novel by Lilian Faschinger.
Finished on: 24.3.2017

Plot:
Magdalena has lived an eventful life and finds that it is time to confess. To make sure that she has the undivided attention, she decides the best way to do that is to simply abduct a priest. So she grabs priest Christian, brings him to a remote location, ties him to a tree and tells him about her life with seven different men and the ends they found – at her hand.

I liked a lot about Magdalena Sünderin, but the book never really won me over completely. I would have liked to like it more. 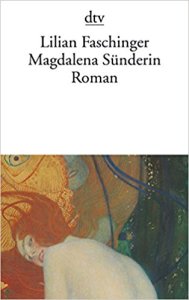 There’s a feminist heart to Magdalena Sünderin that I appreciated: Magdalena keeps meeting the wrong men who abuse her in many different ways. And when it becomes too much for her, she ends the relationships by ending them. That way, Faschinger explores the many ways men make demands on women and gleefully lets Magdalena take care of them.

But when about halfway into the book, one of Magdalena’s men turns out to be a vampire, I was a little taken aback. I mean, I love vampire stories, but the novel is more or less realistic up to that point, so the sudden appearance of vampires – that remains a one-off – struck me as ill-fitting. Especially since it doesn’t fit with the novel’s theme: the very real way in which patriarchic structures and men hurt women. You don’t need a mythical creature to make that point.

I also didn’t really like the fact that the book is narrated from Christian’s point of view, while keeping Magdalena’s story mostly as a monologue. For one, I could have done without the priest faling for Magdalena despite his misgivings at first and two, their voices aren’t distinct enough. They sound almost exactly the same. If you do include two people in your narrative, it should sound like two people as well.

That being said, I did enjoy Magdalena’s escapades and especially her relationship with Austria (a small taste here) that is not really positive, but ties in nicely with her criticism of (masculine) authorities that she can’t quite shake, as she also seeks absolution from the church. But Magdalena never managed to wrap me around her finger like she managed with Christian.

Summarizing: Maybe you’ll fall in love with Magdalena more than I did. It’s good enough to try in any case.