Plot:
It’s time to find new recruits for the lifeguards of Emerald Bay, the Baywatch. Overseen by Mitch Buchannon (Dwayne Johnson), the recruits prepare for a tough competition. All but Matt Brody (Zac Efron) that is, who finds that he shouldn’t have to prove himself at all since he’s an Olympic swimmer and Baywatch would be lucky to have him. But when a new drug hits the Bay, Mitch and Matt take it upon themselves despite their personal differences to clean up their bay and bring those responsible to justice. 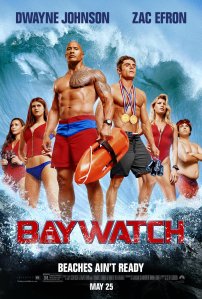 Baywatch is an ode to mediocre white dudes and the awesomeness of Dwayne Johnson. We get a film where we’re supposed to believe in the heroism of two very unlikely candidates basically just because they’re white guys, while all of the hypercompetent women are relegated to being pretty, supportive and getting the basic work done while the men go and prove themselves.

But expecting Baywatch of all movies to treat its female characters decently is a rookie mistake anyway and while I would have appreciated it, I certainly didn’t expect it. What I did expect was that the film would make me laugh anyway and that happened maybe twice. The rest of the time the film is pretty unremarkable and doesn’t really have anything to offer if you can’t laugh at its jokes.

And there were just too many jokes that I couldn’t laugh at. While the film manages to avoid some of the racist jokes it would have probably relished if they hadn’t had a man of color as the protagonist (I shudder to hesitate how the “you people” scene would have played out otherwise, as is, it was one of the better jokes), there are still more than enough sexist and homomisic jokes to sour the entire film.

The script was simply weak, falling short of the necessary irony for remaking Baywatch in most cases, and the pacing was atrocious, making the film feel longer and more painful than it should have ever felt.