Plot:
Joey (Lola Kirke) doesn’t really have many options in her small hometown. One of the few ways to get out is to join the army, so that’s what she does. It is just then when Joey meets Rayna (Breeda Wool) and falls in love with her. And Rayna seems to like Joey, too. But she’s also married and has two children, which spells trouble for everyone involved.

AWOL has an interesting setting and Kirke is really strong, but other than that, I pretty much ended up hating the film.

More often than not (or at least that’s what it feels like), queer stories are told in urban environments, and then often in a rather wealthy setting. So to get a story set in a small town and with characters who struggle financially and whose life is therefore very limited with regards to their options, was a thing I definitely appreciated.

Kirke also gave a great performance (and has a really nice singing voice, too), overshadowing Wool who wasn’t really bad, but who had the more difficult role to sell and didn’t always achieve that. But that was more a problem with the script than with her performance.

The trouble was that the film shows one stupid decision after the other. And I know that people make stupid decisions all the time (I’m no exception), but usually there is some reason for them to decide that way. I didn’t feel that Joey and Rayna had many reasons. Their decisions seemed to be mostly made for giving the story yet another dramatic turn. And it wasn’t just them, there were some really weird filmmaking choices as well (who camps under a power pole? Seriously, that was my breaking point…).

After going on for way too long, we finally reach the end of the film and it would have been so easy to give us a happy ending and to salvage something from that clusterfuck of a relationship and a film. But no, no happy endings for queer couples here. Move along. And best keep moving far away from the film. 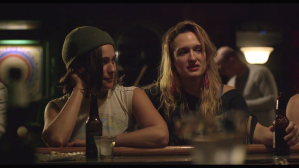