Plot:
Stefan (John Karlen) and Valerie (Danielle Ouimet) just got married very quickly and without the knowledge of Stefan’s family. On the way to them, they take a break in an empty seaside resort. Stefan is in no hurry to reach his family, while Valerie wants things settled. As they discuss when to move on, other guests arrive: the beautiful Countess Bathory (Delphine Seyrig) and her assistant Ilona (Andrea Rau). The countess takes an interest in Stefan and Valerie, and vice versa.

At the festival, the film caught me at the wrong moment and I wasn’t particularly taken with it, but noted that another watch under better circumstances would probably yield a different result. I have since re-watched it and I have to admit that it was much better this time, even if it probably won’t become a favorite of mine. 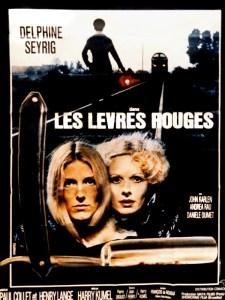 When I saw it at the festival, my take-away of the film was that it has nice images and that it’s hilariously trashy at moments, but that it’s also very stupid and way too long. Watching it the second time, there still were very trashy moments (I’m just saying: lethal glass bowl. Or Mother) and the cinematography was still nice, but I didn’t feel the length of it anymore and I actually didn’t think it was all that stupid anymore.

I mean, subtle it is not. And not everything makes actual sense. But I liked how the film portrayed Valerie and Stefan as a couple and how he turns out to be more of an asshole with every passing minute. I thought that was very interesting as it hit the abusive dynamic on the head.

I was also much more taken with Delphine Seyrig and her Countess, a wonderful vampire, seductive and ruthless at the same time. That she’s into women only makes it even better. I would have wished for a little more regard for Ilona on her part and it would have made things clearer if she hadn’t cornered and manipulated Valerie so much, but I was into her as a character for sure.

Despite those good impressions, the film didn’t quite manage to capture all of my heart. I would have liked a happier ending (though it wasn’t all bad) and a little more coherence in the script. But I can definitely see the appeal of the film now.