Der junge Herr Justus is the first novel in the Weigand Saga by Marie Louise Fischer.
Finished on: 17.6.2017

Plot:
Justus is a medical student in Berlin and he takes his studies very seriously indeed. That is why he didn’t have time yet to meet his cousin Clementine who works as a maid in Berlin. To be fair, he’s also not particularly interested in meeting her and be reminded of their small town roots. But on New Year’s Eve 1899/1900, they have a date. Clementine is incredibly excited, having always hoped that Justus will want to continue the puppy love they experienced as kids. But things don’t quite work out that way. Not only is there a child – born out of wedlock to Clementine’s colleague Rosa – that Justus claims as his own, but Justus also meets the beautiful and rich Stephanie von Stucken and falls for her.

While the book touches on many issues that would have been interesting to read about, it is more interested in sensationalist twists and turns rather than a thoughtful approach. 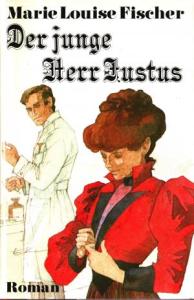 I picked up Der junge Herr Justus from one of the open book exchanges in Vienna as a naked hardcover, so I really had no clue what I was getting into with the book. When I started reading it, I was pretty excited: the book quickly touches on feminist issues like the bad treatment of maids (who had to live with sexual abuse/rape and if they became pregnant as a result, that was their problem) or abortion.

But the longer the book went on, the less the feminist angle convinced me. Justus, our hero, behaves like a complete ass towards Clementine. Clementine is described as “too practical” to deserve love and a man, and when she dares to think that maybe somebody could like her, she gets raped. Generally, the women were vicitmized at every turn while Justus got to be Mr. High and Mighty on Principle, his Morality Horse. And it all plays out as titillation.

It’s a pity. I was hoping to discover a female German-language author for myself, but I will be staying far away from Fischer in the future.

Summarizing: Doesn’t need to be unearthed.