Plot:
After her mother’s death, Ash and her father were very close until he brought home a new wife. When he died shortly thereafter, and Ash was left alone with her stepmother, things turned for the worst. Now, with a stepmother prone to violent outbursts, the only solace Ash can find is in the fairy tale books she reads. It’s no surprise that she starts to wish, fairies would come and take her away. What is more surprising is that an actual fairy prince, Sidhean, seems to hear her wishes and comes to bring Ash some solace. But then she meets Kaisa, a beautiful, strong huntress, and her wishes start changing.

Ash is a beautiful, queer retelling of Cinderella with the dangerous kind of fairies – what’s not to love about that? I don’t know, because I sure did. 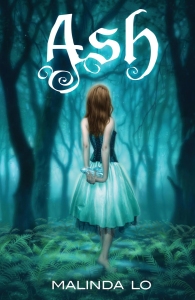 Ash is written with teens or tweens in mind, I’d say, which means that it’s very qickly read – and that is both great, as it really pulls you into the story and not so great, as it is over way too quickly. I wouldn’t have minded staying with Ash longer and to take more time with her story.

But in any case, it’s a beautiful story, written in light and pleasing prose that captures both the enchanting and the dangerous nature of the fairies as perfectly as the grounded liveliness of the huntress and her entourage. And Lo makes this version of the fairies feel like such a natural part of the story, it’s almost hard to remember the original version of the tale. Hasn’t it always been this way?

And my bisexual heart simply rejoiced at the fact that we got a protagonist who falls in love with both a male and a female character in very different ways. Although a lot of reactions to the book seem to be that it’s a lesbian awakening/love story,  and although Sidhean takes on the role of the fairy godmother, their relationship is not platonic/parental at all.

It’s simply lovely and left me with a bounce in my step after I finished it.

Summarizing: If you like fairy tales in both senses, you need to read this.