Plot:
Lorraine (Charlize Theron) is a secret agent for MI6 who is sent to Cold War Berlin after the death of a colleague. She’s supposed to recover a list of MI6 agents that went missing. But the situation in Berlin is unclear, starting with the questionable trustworthiness of her contact David (James McAvoy). As Elaine tries to navigate the intricacies of a city at a (political) boiling point, things get more complicated with every step.

Atomic Blonde was a disappointment in pretty much every regard. It’s stupid and boring and I very much hated almost everything about it. 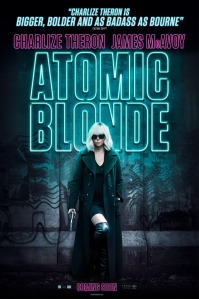 I was really looking forward to Atomic Blonde. A filme about a bisexual female spy who kicks some serious ass? Starring Charlize Theron? That has every potential to be absolutely awesome. But unfortunately what it turned out to be was male gazey as fuck, filled with stupid and pretty damn lengthy for an action film. The film manages to waste pretty much everything at its disposal.

There are two things that do work pretty well: the film’s look and style is really great and the soundtrack is filled with 80s awesomeness. But a nice look and a good soundtrack don’t make a film when they have literally nothing to build on. 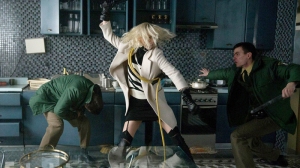 I also really struggled with the film’s editing. I thought it was simply bad – especially surprising because this is a film that cares so much about the way it looks. You’d think that this would extend to the way those images are strung together (of course that’s a very flippant description of editing, a monstrously important part of any film).

I hope that one day I will get the queer, female spy flick that I think the world (and especially Charlize Theron) deserves, but Atomic Blonde is definitely not it.