Plot:
After what happened, Andy (Alex Vincent) is separated from his mother – who is put in psychiatric care – and now lives with a foster family mother Joanne (Jenny Agutter), father Phil (Gerrit Graham) and their teenage daughter Kyle (Christine Elise). Things should be settling down, but Chucky (Brad Dourif) doesn’t just give up, and after he finds himself reconstructed by the toy company, he’s dead-set on claiming Andy’s body for his own.

I didn’t love the first Child’s Play, but it worked. But Child’s Play 2 was a case of “less would have been more” and I thought it was a step down from the first one.

There are two things where I would have most appreciated a little more restraint with the film. The first is the animation. We get to see Chucky a lot more in this film than we did in the first, and the additional focus wasn’t so great because the (mechanical) animation and the special effects just weren’t up to the level required for that additional scrutiny.

The second was the showdown in the factory, where they destroy Chucky over and over again and he just keeps coming back. After the second time this happens, I was over it – but the film certainly wasn’t. 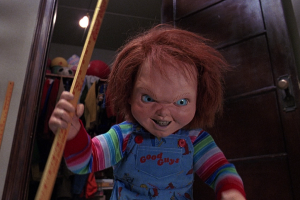 In this installment of the series they push the humor (that was already present in the first) and basically forget about the tension, and the humor only works at certain points for me, so that was not necessarily the best thing for my purposes.

But it isn’t all bad. I very much liked Kyle as a character and I thought that Christine Elise did a good job with the role. And I liked how they explain the new setting and the “disappearance” of Andy’s mom. It definitely makes sense.

Put altogether, though, I just wasn’t taken by this film.