Plot:
Agnes (Lára Jóhanna Jónsdóttir) has had enough of Atli (Steinþór Hróar Steinþórsson) and throws him out, even keeping him from seeing their daughter Asa (Sigrídur Sigurpálsdóttir Scheving). So he moves in with his parents Baldvin (Sigurður Sigurjónsson) and Inga (Edda Björgvinsdóttir). They are involved in a bitter dispute with their neighbors Konrad (Þorsteinn Bachmann)  and Eybjorg (Selma Björnsdóttir) over a tree in their garden that is casting the neighbor’s house in shadows. As everybody fights their battle, things start to get out of hand.

From the description of the film, I expected it to be a (dark) comedy, but I was mistaken about that. But this misunderstanding was quite indicative for the film for me, as it appeared that we kept communicating on two different levels and never reaching each other properly.

I don’t know if I just misread the description of the film, or if it was meant to be funny but just didn’t struck me as such. There were a couple of strange and humorous moments, but most of the tone of the film for me was distinctly tragic.

I usually like dark humor, so just because something is also sad doesn’t mean it can’t be funny as well, but in this case, the sadness stood out to me so much more that I couldn’t see the humor.

But if the film isn’t funny to you, what you’re stuck with is that a bunch of unsympathetic characters keep being cruel to each other in continuously worse ways. And I wondered why I should be interested in any of that, really, or why I should put time into watching it.

I did finish the film although it was clear that we would never get on the same level of communication. When it was finally over, I was mostly relieved that I didn’t have to spend any more time with the film or any of its characters. 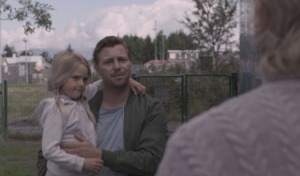 Summarizing: Didn’t speak to me.