Plot:
It’s 2008 and Samir (Sami Bouajila) and Amal (Nadia Kaci) are celebrating their 20th anniversary in Algiers, remembering not only their relationship, but also the time of the civil war. Meanwhile their son Fahim (Amine Lansari) and his friends Feriel (Lyna Khoudri) and Reda (Adam Bessa) are having a different kind of night out: Reda wants to get a surah tattooed, an act of faith for him that may very well be perceived as blasphemous. Fahim, who is mostly preoccupied with pissing of his parents, and Feriel – a progressive young woman outspoken in her politics – don’t really understand Reda, but as they have nothing better to do, they join him on his quest to find somebody willing to do it.

The Blessed takes a while to get where its going, but once it’s underway, it carries quite a punch, sketching a layered picture of a struggling, post-war society. 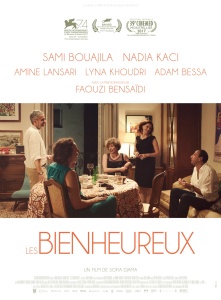 At the beginning of the film, I was afraid that it would consist only of spirited discussions about various political topics that may all be connected but that never really go anywhere. Which would have been interesting, but a little too static to truly engage. But after a bit, the film finds its stride and the action starts.

By that point I found myself deeply burrowed into the story and the characters, making me experience the way in which their at first seemingly worryless and free-spirited existence keeps encountering vaguely and non-vaguely threatening limits and people enforcing them, as well as their own past trauma.

Starting with a feeling of unease, this quickly develops into the conviction that this night can’t possibly end well for them all, which pushed me more and more towards the edge of my seat and kept me there.

It would be an impressive film with a strong story and an even better cast if it was made by any seasoned director, but given that this is Djama’s first feature, it becomes even more astonishing. Hopefully, she’ll make many more films like it. 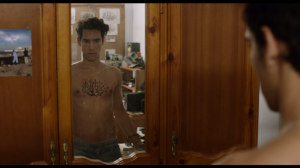