Plot:
Derek (Steven Yeun) is an attorney for a big law firm. Or rather, he was. He was just fired for a mistake he was framed for. As he still grapples with that fact, the office building is put under quarantine: a virus has spread in the building – a virus that makes everybody lose their impulse control. This provides Derek with the perfect opportunity to face the executives and give them a piece of his mind. And he doesn’t even have to do it alone: as luck will have it, disgruntled client Melanie (Samara Weaving) has her own plans with the executives.

Mayhem is incredibly entertaining and fun. It breezes along from one bloody, gorey scene to the next, leaving no space for a second of boredom. 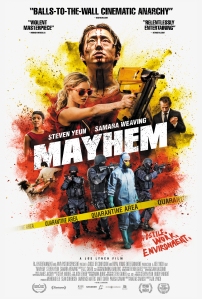 I don’t really agree with the concept behind Mayhem: if people lose their inhibitions, I don’t think that things would turn so aggressive so quickly, especially not with everyone. Sure, there will be people who will turn aggressive, but I do think that more people would start making out and even more would scratch their asses or pick their noses. But ok, maybe in corporate law firms aggression is more of a value, drawing more of the people who would turn to violence. Even if you do believe that people would turn aggressive, they could have been a little more consequent with the concept at times.

In any case, I was able to accept the concept and I really enjoyed watching Derek and Melanie tearing corporate culture a new one. It’s not quite anti-capitalist, but it’s getting there. And that’s always fun to see.

That being said I was bothered by the fact that the film throws slurs around like there’s no tomorrow. I really could have done without the “gimp” and the myriad of gendered insults like “cunt” and “bitch”. There are so many great curses that aren’t ableist or misogynist, why not use those?

That the film still worked as well for me as it did – and it really did – is mostly due to Steven Yeun. He’s funny and charming and kick-ass and amazing as usual (seriously, if you need any more prove that Hollywood is racist, it’s obvious in the way he isn’t a huge star, leading every second film). His performance and the pitch-perfect pacing make this film simply a fun experience. 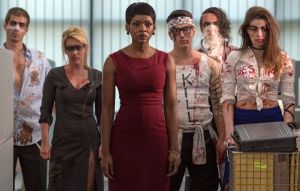