Plot:
Yuji Noda (Yôji Tanaka) works as a debt collector and he really, really hates his job. He’s also not good at it at all. To make matters worse, he’s just been diagnosed with cancer and doesn’t have much time to live anymore. That’s when parasitic aliens invade earth and turn humans into necroborgs, half machine, half flesh, all ready to fight each other. Yuji remains unaffected and has to take up the struggle against those invaders.

Meatball Machine Kodoku starts off well enough, but once the bloodbath starts, the film loses its drive and energy and peters out. 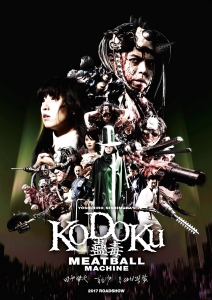 I haven’t seen the film this one is a sequel to. Admittedly, I wasn’t even aware that this was a sequel. Going into the film, this left me a little confused at first, but the concept isn’t all that hard to understand, so I was quickly over it. And when the film starts, it did manage to hold my attention, despite the fact that we’ve seen many films by now where a middle-aged man, dissatisfied with his soulless existence and in love with a much younger woman is brought to turn his life around by circumstances. If you ask me, we’ve seen way too many of these films.

The mysterious figure in green who seems to walk aimlessly through the streets, dragging white paint behind her is a big part of why the first part worked so well for me. She’s incredibly creepy and really sets the mood – an amazingly effective device. 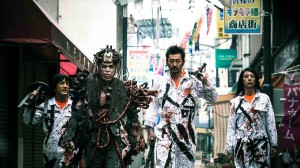 But other things I struggled with a lot. It wasn’t just that the film just didn’t bring the necessary energy to make its out-there-ness work, it was also that I had issues with the kind of out-there-ness it shows. I didn’t appreciate that there’s a monster fight troupe that are styled after nazis, but they’re definitely the good guys here and we’re supposed to empathize with them.

Gratuitous nakedness (all female, of course) was another thing that didn’t float my boat. I don’t know how long the screaming topless woman was being driven around the city on the back of a motorcycle-necroborg, but it felt like hours (and contributed to the feeling of this film being simply way too slow in the second half).

So instead of hollering at the weirdness and the blood, I was pretty much bored by the film. And that’s really not what seeing all this shit should make me feel.