Plot:
Divine (Divine) has been decreed the filthiest person alive and had to go into hiding with her mother Edie (Edith Massey), her partner Cotten (Mary Vivian Pearce) and her son Crackers (Danny Mills). But Connie (Mink Stole) and Raymond Marble (David Lochary) aren’t happy with Divine having that title. They want it for themselves, so they set out to make sure that Divine – now Babs Johnson – can’t get up to any more filthiness.

Pink Flamingos has an undeniable force, but it was also a little exhausting to watch. Be that as it may, it’s quite a film.

John Waters being the guest of honor at the /slash, they showed quite a few of his films – four of his older films in a row and his newest film in a special screening at another venue. I opted for his old movies, having never seen them. But I was pretty dead on my feet by this point and Pink Flamingos being a demanding film, I didn’t manage to stay awake through it. And when I slept through even more of Female Trouble (that was shown afterwards), I called it a night. Which is a very long and round-about way of saying that it took me a second attempt to sit through the film and I was pretty happy that the second time around I could hit the pause button every now and then.

Because the film is a good 90 minutes of being hyper and loud and it’s a little tiring and tough. In smaller doses that’s something I can find entertaining, but over longer periods, that wild ride turns a little nauseating.

But mostly I thought that the boundary pushing was fun and interesting. Although admittedly, when it came to including the chicken in fucking, I found it neither fun nor interesting, but just cruel to abuse living chickens (or any other animal) that way. I also wasn’t particularly happy about the nazi uniform making an appearance.

There are things that make more sense than others, but Waters created a fully formed parallel take on our world that is populated by weirdos, outcasts and queer people. And that in itself is an achievement that I would like to see accomplished more often. 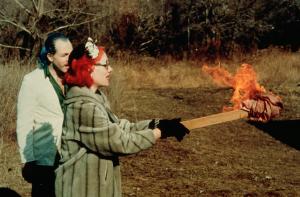 Summarizing: Not easy, but interesting.