Plot:
Chrissy (Asta Paredes) and Lauren (Catherine Corcoran) have just come out of a crisis at Nuke ‘Em High, and are already slithering into the next. On a personal level, their principal threatens to out them. On a larger scale, rich company owner Herzkauf (Lloyd Kaufman) isn’t done trying to make profits at Nuke ‘Em High any way he can.

After the short film that ran before it, I fell asleep for the first half or so of the film. But that just meant that I was awake enough to really take in the secod half even though I really didn’t want to. Troma will probably never win me over.

The film desperately tries to make a point about free speech and even includes a meta scene where we can see Kaufman as director arguing over the cut of the film and that he will reserve the right to make any joke he likes. But as usual when privileged people argue about free speech and being allowed to make any jokes they fucking want, two things are missing in the discussion: a) it’s only a free speech issue when the government forbids certain expressions and b) at whose cost do those jokes come?

In this case, Kaufman fights for the right to be sexist as fuck (and just because they know that it’s sexist and lampshade the fact, it doesn’t make any less sexist), the right to make rape jokes, to make transmisic jokes and to make an antisemitic joke where we see a Jewish character wearing a kippa actually shitting money. And honestly, the world wouldn’t have missed anything if those jokes hadn’t been made.

You may call it irreverent and not adhering to political correctness, and that’s certainly true. But honestly, I’m a fan of political correctness in the sense of trying to respect people, especially when it’s an oppressed group. You don’t make any points in my book by punching down, even when you frame it as a political stance for freedom of speech. Unfortunately, being sexist, transmisic or antisemitic is not an anti-mainstream thing, quite to the contrary.

But I guess, if you’ve loved Troma movies so far, you’ll love this one as well. 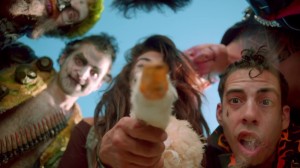 Summarizing: Troma fans will probably be happy. I wasn’t.