Plot:
Soldier Lars Koch (Florian David Fitz) is on trial. He shot down a civilian plane that was abducted by terrorists who threatened to fly it into the next city which would have raised the death toll considerably. So Koch didn’t wait for orders, he decided on his own to shoot down the plane. Now the judge (Burghart Klaußner) and his jury have to decide whether Koch’s actions were justified. As Koch’s defendant (Lars Eidinger) and the district attorney (Martina Gedeck) make their cases, big philosophical questions arise.

Terror – Ihr Urteil was made for an audience that gets to play the part of the jury. So the people watching the film get to vote in the end whether Koch should be found guilty or innocent. Two endings were shot for the film and depending on the voting results, one of them is screened. I saw the film as part of a scientific conference that couched the film in a lot of interesting discussions (and was able to screen both endings). That conference also made it even clearer that Terror – Ihr Urteil is expertly made bullshit. 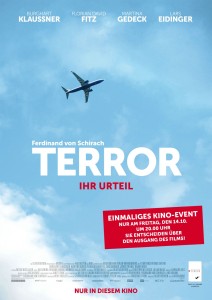 The conference I saw this at lasted two days and they screened the film on the evening of the first day, so we spent a day talking through more or less basic legal problems with regards to the film and then another day disseminating what we had seen. There was also a vote that showed pretty much the opposite result from the usual voting (where people mostly go for innocent). That difference in result can be explained by the thorough discussion beforehand, but als proves the utter fallacy of a legal system that Terror – Ihr Urteil shows: when experts (in, of course, a very broad definition of the sense, I’m not saying that a day worth of discussion makes anyone an expert in the field) and laypeople judge so differently, how can this be reconciled?

But that’s not really the question that Terror – Ihr Urteil is trying to raise. Instead it is attempting to solve the Trolley Problem (because that’s basically what this set-up boils down to), with the added eye-catcher of calling it terrorism. The problem is that it tries to do that in the most sensationalist way. And while I don’t think that we can solve ethical problems with pure rationality (as if such a thing existed), it surely doesn’t help if we use various arguments against each other without realizing that they are different arguments (e.g. weighing the question of the chain of command against the question whether a human life’s worth can be measured at all).

That mix may be not unrealistic – I doubt that there are many actual court cases where somebody really methodically lays out the levels on which arguments are made and then goes through the levels one by one – in this fictional case, one could have used the opportunity to go about it in a structured way. Instead the film remains an argumentative mess (and from what I gather from the people who actually know their stuff, it’s a legal mess as well).

But emotionally, it is very effective/affective. It’s practically impossible to remain calm, also because the cast is excellent (above all, Gedeck is great). That means that Terror – Ihr Urteil is an excellent case study in getting people to participate in something they barely understand: everybody will want to vote after having been presented with the case. But whether they are actually able to make a properly informed choice remains doubtful. 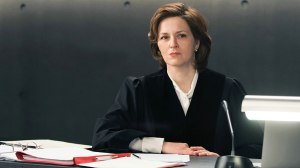 Summarizing: A great starting point for discussion, but by no means an end to discussion.