Die Abenteuer des Prinzen Achmed
Director: Lotte Reiniger, Carl Koch
Writer: Lotte Reiniger
Based on: One Thousand and One Nights
Part of: Film and Music Cycle in the Konzerthaus
With music by: Peter Rosmanith and Otto Lechner
Seen on: 11.12.2017
1-gif-review

Plot:
A sorcerer creates a flying horse. Intrigued, the Caliph wants to buy it, but the sorcerer doesn’t want money for it – he wants Princess Dinarsade. Her brother Achmed tries to save her, but the sorcerer lures him on the horse and they fly off. It takes Achmed a while to learn to control it, but once he does, he is ready to have quite a few adventures it takes him to.

Die Abenteuer des Prinzen Achmed is probably the oldest (surviving) full length animation film and it is obvious how painstakingly it was made. The result is impressive, even if the story itself isn’t. The incongruous accompaniment with accordion music was a surprisingly good fit, making the evening absolutely enjoyable.

The film is made entirely with cutouts in black that are placed in front of colorful (tinted) backgrounds, a process Lotte Reinger invented and made herself. The filigree cutouts are all handmade, as is their movement, of course. It’s a work-intensive process, but the resulting images really are beautiful to look at.

Given the age of the film, it’s not surprising that the aesthetics, the way the Arabian world (it is based on a story out of One Thousand and One Nights) is evoked, are rather stereotypical and exoticizing. The story-telling is not that strong either, but it shall be forgiven, given the circumstances.

The music by the Lechner and Rosmanith is a startling choice for the film, given that the accordion as it is played here is a very Austrian instrument. But it does work very well – surprisingly so. In between the acts they had filler songs where they actually sang. I could have done without that part, although the songs weren’t bad. It just didn’t seem like the film called for it.

In any case, it seems like almost the perfect way to watch this film – a film that had been on my list for quite a while as both a fan of animation and as someone who tries to be informed about films made by women. But even if you don’t get the chance I did, I can recommend watching it. 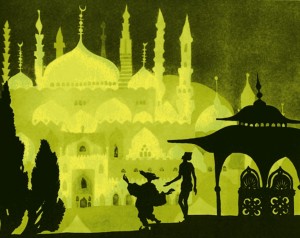