Plot:
1967. After a party in a speakeasy, the (white) police arrests the (black) party goers very publically, leading to protests in the community. During the ensuing riots Larry (Algee Smith) and Fred (Jacob Latimore) stay at the Algiers Motel which is close to the riot area, where the atmosphere is still rather light. But when the police reach the motel, things turn bloody for the guests very quickly.

Detroit is a hard-hitting, very effective film. It’s a film with a lot of weight that impressed me (as a white European) a lot.

If you didn’t think police brutality is a problem, Detroit has all the necessary ingredients to make you realize that it really, really is. The injustice of it all is unbearable – and to imagine that the events of the film happened 50 years ago, and that things didn’t start then and are still on-going: it’s horrifying beyond belief. And of course, it doesn’t need a film to prove just how horrible this type of abuse and violence is, but to get it in this condensed and personal form just emphasizes the point.

Bigelow puts everything very effectively on screen: she shows that it’s not simply a few rotten apples in the police force, the entire system is fucked up. And that there really is no good way to behave in that system when you’re not the one in power. 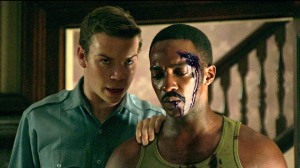 Bigelow wasn’t the only good thing about the film: The cast is great and there are many excellent people in small roles. The script does fine work with the characters, even if it does feel a little too loose and jumps around a little too much. And the music is beautiful.

There are a couple of caveats to this otherwise strong film: that a white director and writer took on this story (and probably a predominately white rest of the crew) is not unproblematic. And that there are practically no women of color in the film (and generally very little room for women, period) is also a downside.

But other than that it’s a film that lies like a stone in your belly: it’s uncomfortable and weighs you down, just as it should. Especially as a white person you should watch it.