Plot:
Maurice (James Wilby) meets Clive (Hugh Grant) at Cambridge University where they connect over philosophy and music. Their friendship quickly deepens and when Clive confesses his love for Maurice, Maurice is thrown at first but finally able to admit his love for Clive as well. Only that Clive wants to keep sex out of their relationship, especially since homosexuality is still forbidden in the UK. Trapped between (internalized) denial and a longing for happiness, Maurice and Clive have to make some important decisions.

Maurice is a beautifully crafted film that – given the time it is set in – I thought would be much sadder. Instead it is a powerful and very romantic call to live your truth.

END_OF_DOCUMENT_TOKEN_TO_BE_REPLACED

Plot:
Shaun (Simu Liu) tried to built a life for himself, away from his father Wenwu (Tony Chiu-Wai Leung) and Wenwu’s private army, the Ten Rings – including actual ten rings that give Wenwu awesome powers. And for the last decade, Shaun has been pretty successful in his endeavor. Not even his best friend Katy (Awkwafina) suspects that there is more to him than a party-loving valet. Until a group of fighters led by Razor Fist (Florian Munteanu) attack Shaun and he has to finally confront his past, his family, and his future. Not without Katy, though.

Shang-Chi and the Legend of the Ten Rings is a thoroughly enjoyable film with a good mix of fighting, emotions and humor. I had a very good time with it.

END_OF_DOCUMENT_TOKEN_TO_BE_REPLACED

Plot:
Damian (Ben Kingsley) has led a hugely successful life, regretting only that he is estranged from his daughter Claire (Michelle Dockery). Now he is old, rich and dying. But he doesn’t feel ready to die just yet, so he is happy when he discovers Albright (Matthew Goode), a scientist who promises that he can have a new, freshly grown body and start all over again. Damian agrees to the procedure. When he wakes up, his body (Ryan Reynolds) lives up to all of his dreams. As he gets used to it, though, he also keeps getting haunted by dreams and nightmares that appear to him more real than they have any right to be.

Self/less is a decent film. Nothing here says greatness, but it isn’t bad either. It is like a case study for solid entertainment of a kind that has gotten rarer in recent years as budgets have grown and shrunk, leaving few players in the middle of the field.

END_OF_DOCUMENT_TOKEN_TO_BE_REPLACED

Plot:
It’s 1979 and the situation for Ethiopian Jewish refugees in Sudan isn’t exactly great, to put it mildly. Kebede Bimro (Michael Kenneth Williams) is trying to find ways to get them out of there and to Israel. When he teams up with Mossad agent Ari Levinson (Chris Evans), things start to come together. Ari suggest that they could use an old vacation resort as a cover to get the refugees out. Recruiting a team (Alessandro Nivola, Haley Bennet, Michiel Huisman, Alex Hassell), they set to work.

The Red Sea Diving Resort really is a mess. Not only is it a series of clichés, it is also absolutely racist and uncritically zionist. I can only recommend that you stay far, far away from this one.

END_OF_DOCUMENT_TOKEN_TO_BE_REPLACED

Plot:
A few years ago, the panther Bagheera (Ben Kingsley) found a human baby and decided he couldn’t just let it die. So he brought it to the wolves Akela (Giancarlo Esposito) and Raksha (Lupita Nyong’o) who raised him as their own. Now the baby – Mowgli (Neel Sethi) – has grown into a child who feels perfectly at home in the jungle. But the tiger Shere Khan (Idris Elba) will not suffer a human in the jungle. With the threat of murder in the air, Bagheera decides that the safest option is to bring Mowgli back to the humans.

The Jungle Book is a weird film. On the one hand, it stays extremely close to the animated Disney version, on the other hand it often enters grimdark territory. That makes for a very weird mix that made me scratch my head more than once. 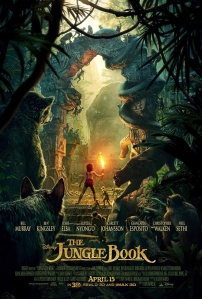 END_OF_DOCUMENT_TOKEN_TO_BE_REPLACED

Plot:
Philippe (Joseph Gordon-Levitt) is a tightrope walker and he dreams of doing something daring, more daring than anybody would think possible. When he sees the twin towers of the World Trade Center in New York for the first time, he is dead set on walking between them. And he knows that his time is limited – once they will have finished construction on the towers, the feat will be impossible to pull off. So Philippe gathers his co-conspirators and starts preparing.

The Walk is an entertaining film that suffers from the fact that the documentary Man on Wire covered the same ground and at least equally as entertaining. It’s not bad to watch, but the 3D doesn’t really make it better than the original documentary.

END_OF_DOCUMENT_TOKEN_TO_BE_REPLACED

Plot:
Dennis Stock (Robert Pattinson) is a young photographer who is always looking for a story. When he meets actor James Dean (Dane DeHaan) just before the premiere of his first big film East of Eden, Dennis is sure that he is on to something. He convinces his boss John Morris (Joel Edgerton) to go along and starts trailing Jimmy. Jimmy is not an easy person and Dennis is desperate for things to work out somehow. Slowly they get closer though.

Life is one of the most static, boring and long [I’m trying very hard not to make a “lifeless” pun] films I have ever seen. It was so intensely boring that I was absolutely uncomfortable while watching.

END_OF_DOCUMENT_TOKEN_TO_BE_REPLACED

Plot:
Rick (Christian Bale) is a screenwriter living in LA. He moves from party to party, woman to woman. He seems to be looking for something, but who knows for what?
[Actually the first note I wrote down for this film is: “I don’t think I could write a plot description for this film”, so you’ll have to live with that little bit.]

I don’t like Terrence Malick movies. I decided to watch this one anyway because Cate Blanchett! Christian Bale! Natalie Portman! And so many other actors I love. But it turns out that Knight of Cups is everything I hate about Malick movies turned up to 11, while nothing I used to still like about them works for me anymore.

END_OF_DOCUMENT_TOKEN_TO_BE_REPLACED

Plot:
Wendy’s (Patricia Clarkson) husband Ted (Jake Weber) just left her, which came as a complete surprise to her. Wendy is slowly losing herself in despair, she barely has any social contacts and her daughter Tasha (Grace Gummer) works on a farm in Connecticut. But if Wendy learned how to drive, she could visit her. So when chance brings Darwan (Ben Kingsley) to her doorstep who happens to be a driving instructor, she goes for it. But it turns out that Darwan can teach her much more than just to drive.

Learning to Drive was nice, though I didn’t care for the romantic angle or for the occasional bouts of orientalism in it. 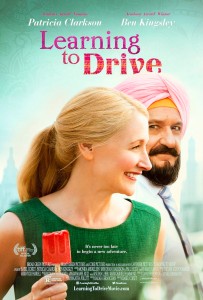